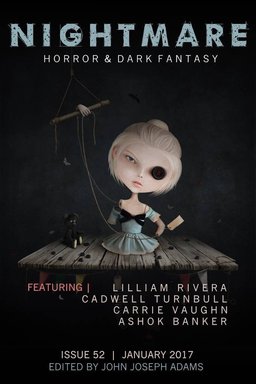 The January 2017 issue of Nightmare is now available, with original fiction from Cadwell Turnbull and Carrie Vaughn, and reprints by Lilliam Rivera and Ashok Banker. Here’s Kevin P Hallett’s thoughts from Tangent Online:

“Loneliness is in Your Blood” by Cadwell Turnbull

This short dark horror describes a female vampire who makes herself invisible while she hunts for human blood. The vampire thinks she is immortal, living among the American slaves. But after hundreds of years, she finds herself growing old. As she ages, she is compelled to suck a young couple dry of their blood, an act that induces her own pregnancy and the birth of a new girl vampire…

This horror short introduces us to Violet, the youngest of three sisters charged with minding the sheep. Her elder sisters warn her each day of the dangers outside the home, and that they will all starve if any sheep are lost. One day, as she prepares to herd the sheep from the pasture, she finds a lamb missing. Violet is torn between her sister’s warnings about the dangers and their cautions about starving if any sheep are lost.

She decides to search for the lost sheep. Drawn to its bleating, she climbs the haunted hill where the demon, Redcap, traps her… The story had a nice pace to it and the plot was engaging, pulling the reader forward…

Read his complete review here. The complete contests of the issue are listed below.

“Loneliness Is in Your Blood” by Cadwell Turnbull

This is how you live forever. You cup your fingers under your chin, dig your nails into the soft meat and peel your skin away. First up and over your head, letting it fall on your back like a hood, and then sliding your fingers beneath the skin on your clavicle and slipping the lifted layers of tissue over the curve of your shoulders. You squirm and shimmy and writhe, curling your skin away from the sticky braids of muscle on your arms, your ribs, your stomach, your hips, your thighs. You let the wet membrane fall in a heap, stepping out of it like clothes.

Three poor sisters lived in a cottage at the edge of a wild place. The elder, Rose and Lily, started each day in a furious bustle, storming around the kitchen before dawn preparing for the day, frying bread for breakfast, slicing cheese for lunch, scrubbing the table, which was already clean, and pestering the youngest, Violet, about her chores. Had she collected the eggs yet, had she milked the cow, had she made sure the iron and rowan were still above all the doors to protect them from the Fair Folk so the hens would keep laying and the cow keep giving milk?

“The H8TE” by Lilliam Rivera (from Sucker Literary Magazine, 2014)

I give the chain attached to the radiator in her bedroom another tug. There’s enough slack for her to move about the room but not enough for her to get out. Her breath stinks like spoiled milk, so I inhale through my mouth. I try my best not to look directly at her face because if I do I won’t be able to go through with it. There are two thick layers of aluminum foil and garbage bags covering her bedroom windows. To secure the layers tight, I nail the quilt from off my bed to the wall. This has to work. Tomorrow I go back to school.

The minute Shanti saw the dead fruit seller, she knew her prayers had been answered. She had been praying for this particular miracle all her short life. She had even done the unthinkable on her eighth birthday last month. Despite all the taboos drilled into her since she was old enough to go to temple, she had dared to prostrate herself before the dark goddess, the one whose name Maa had warned her never to speak aloud. The one whose effigy was kept in a separate altar, behind the main temple. Shanti had left her pallet at night, crawling past her six siblings, parents, grandparents and uncle.

The non-fiction this issue includes the latest installment in their long-running horror column, “The H Word,” author Kat Howard talks about the terror of changelings, plus author spotlights, an editorial, and a feature interview with Seanan McGuire, aka Mira Grant.

Nightmare is edited by John Joseph Adams. This is the 52nd issue. Subscriptions are available for just $1.99 per issue, single issues are available in multiple digital formats for $2.99. Purchase copies and sample free content at the website.