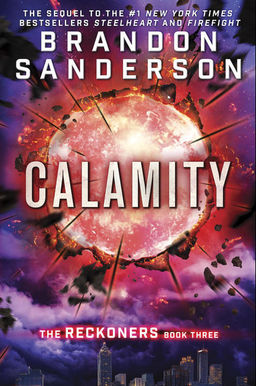 To begin, let’s cue the music:

Finally, I made it to Calamity, which concludes Brandon Sanderson’s Reckoners trilogy. I’ve been looking forward to this one for a while because it’s the only series of Sanderson’s that I’ve really taken to; The Stormlight Archive tired me out halfway through the second book, and I haven’t felt the urge to start Mistborn. But the Reckoners trilogy is just a blast. It’s superhero YA, pulpy and exciting and admittedly un-scientific (which is a sort of running meta-joke among the characters) but with the sort of excellent character work that I look for in fiction.

The final installment doesn’t disappoint with regard to the above. Narrator David Charleston is just as optimistic, determined and corny as before, though he’s grown out of his quest for vengeance against the super-powered Epics that destroyed the world. Now that he’s saved one (and started dating her) he’s out to save another, his friend and mentor Prof, to prove that the Epics can learn to fight their darker impulses, like Anakin turning from the dark side (except more successful, hopefully).

What seems like a pretty straightforward storyline – find Prof, save Prof, then destroy the source of the Epics’ powers – goes in some unexpected directions, eventually losing momentum. Realizing that the solution to the Epics is even more complicated and out of reach than it’s painted at the start of the novel added an extra layer of tension that kept me up one night finishing off the damn thing so I could get some sleep.

However, said ending was the weakest part of the trilogy for me. The answers David is after are thrown at the reader almost too quickly, and I found myself wishing certain elements were drawn out a bit longer – I’m wondering if it was a combination of editorial oversight and the fact that Calamity is YA that caused the rapid finish.

The final twists on the Epics, certain specific powers, and even David himself are satisfying, but Sanderson borders on an after-school preachiness at times as his characters learn valuable lessons about the nature of humanity. Though that’s not necessarily a bad thing, since so much fiction these days seems to focus on apocalypse and pessimism. I just like the darkness, I think.

I will say that I’m sad to see this series end. Inundated as we are with superhero fiction, Sanderson has done something unique with the Reckoners trilogy. Even better, he manages allusions to the Man of Steel that, while not very subtle, put a satisfied smile on my face as I set Calamity down and started humming John Ottman’s Superman theme on my way to bed.