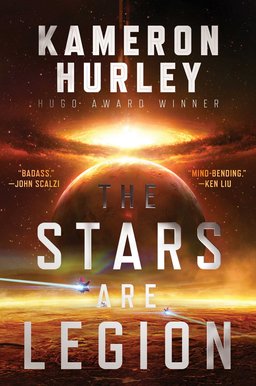 Kameron Hurley made a splash with her very first science fiction novel, God’s War (Night Shade, 2010), a “bugpunk” novel set on a desert world where technology is based on insects. It was nominated for a Nebula Award, and was followed by two more books in the Bel Dame Apocrypha trilogy. The Mirror Empire (Angry Robot, 2014), the first novel in her grimdark epic fantasy trilogy The Worldbreaker Saga, was a 2015 Locus Award Finalist and Gemmell Award Nominee.

Her standalone space opera novel The Stars are Legion is one of the most highly anticipated novels of 2017. It arrives in hardcover from Saga Press on February 7, 2017.

Somewhere on the outer rim of the universe, a mass of decaying world-ships known as the Legion is traveling in the seams between the stars.Here in the darkness, a war for control of the Legion has been waged for generations, with no clear resolution.

As worlds continue to die, a desperate plan is put into motion.

Zan wakes with no memory, prisoner of a people who say they are her family. She is told she is their salvation – the only person capable of boarding the Mokshi, a world-ship with the power to leave the Legion. But Zan’s new family is not the only one desperate to gain control of the prized ship. Zan finds that she must choose sides in a genocidal campaign that will take her from the edges of the Legion’s gravity well to the very belly of the world.

Zan will soon learn that she carries the seeds of the Legion’s destruction – and its possible salvation. But can she and the band of cast-off followers she has gathered survive the horrors of the Legion and its people long enough to deliver it?

If Scalzi and Liu are in, I’m definitely interested 🙂

Me too. So nice to see a stand-alone novel these days, and by an author writing fascinating SF.