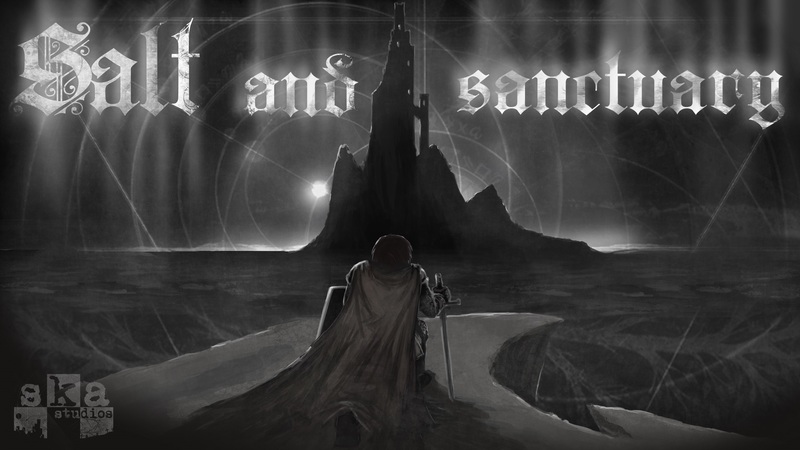 Salt and Sanctuary is the latest PS4/Windows game from developer Ska Studios, who have made a name for themselves with their unique aesthetics. Staying true to their 2D roots, the game feels like a 2D Souls-like.

However, while the game may or may not have been intended to be compared to the Souls series (Dark Souls, Bloodborne, etc), the game misses the mark on what makes those games so amazing.

The game begins with you escorting a princess to an important meeting to bring about peace. Of course the ship gets attacked, and you find yourself washed up on the shore of a mysterious island with everything trying to kill you. 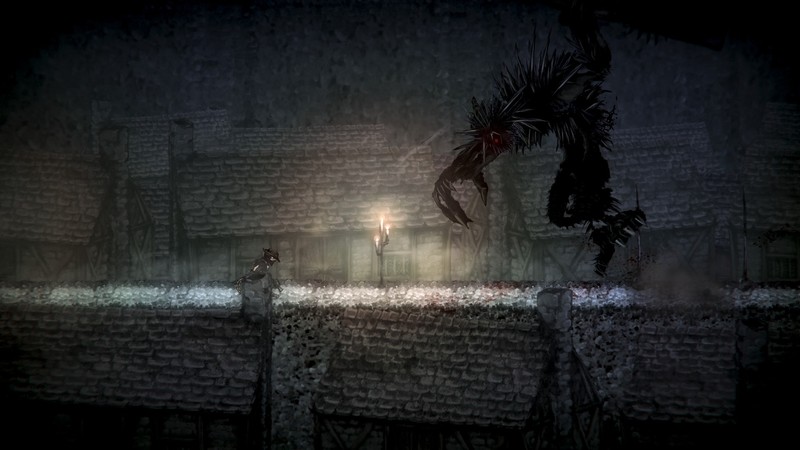 As with the Souls series, death will respawn all the enemies you killed and leave your salt (used for upgrading and leveling up) at your corpse. You have a wide array of weapons and gear that you can find that are tied to different equipment categories.

Leveling up allows you to put points into a massive skill tree that raises your stats and unlocks the ability to use higher tier gear. You won’t be able to use everything, and the game does a good job of letting you grow however which way you want.

The world is full of things trying to kill you, and combat is fast-paced. You have a light and heavy attack that can be chained for combos. And this wouldn’t be a game like Dark Souls without having a lot of bosses to fight.

With that said, Salt and Sanctuary does things a bit different compared to the Souls series.

The “sanctuary” in the title is represented by points where you can claim for certain covenants. At these spots, you can use idols that are found to summon people to help you and make the region easier in some way. These areas also act as fast travel spots and your bases of operation. The pacts themselves can be upgraded to provide you with more items whenever you return to a sanctuary. 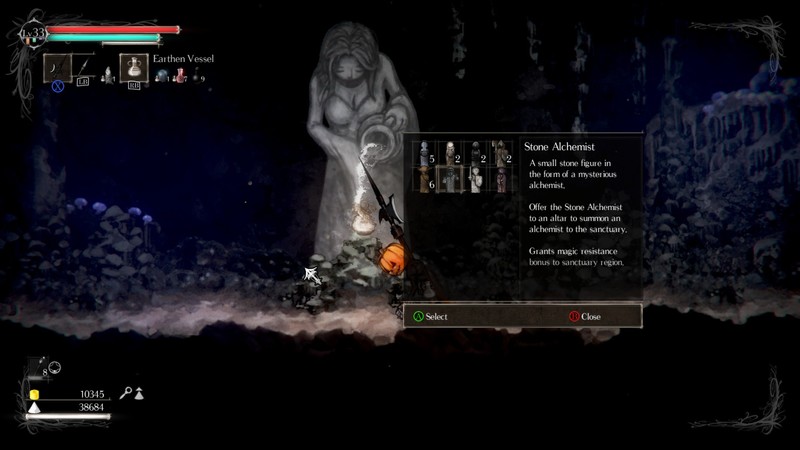 As you play through the game, you’ll unlock new moves in the form of brands that will allow you to get to new areas in the game. There are a lot of secrets and items to find in the world.

As with the other games from Ska Studios, Salt and Sanctuary looks amazing.

The game really does look like a 2D Dark Souls. Salt and Sanctuary may come close to greatness, but it’s missing a few key spices in the Souls recipe.

Salt and Sanctuary to me feels like a game that is 2/3rds amazing, but lacking that final part that elevated the Souls series to greatness. Enemy designs and their AI are very basic; most enemies will simply charge you. The 2D space also limits what enemies are able to do and makes riposting very easy to pull off.

Where this hurts the game the most is the boss designs. The bosses are all built on simple patterns, and are difficult thanks to huge health pools. Anyone who has played a Souls game knows that the boss difficulty is more about figuring them out rather than beating them down. I started to get bored fighting some of the bosses in Salt and Sanctuary, and that’s not good.

You’ll find that most enemies are either complete pushovers or nightmares waiting to kill you. This creates some off-balance difficulty, depending on your build and gear, and enemies with unblockable grabs that do intense damage. 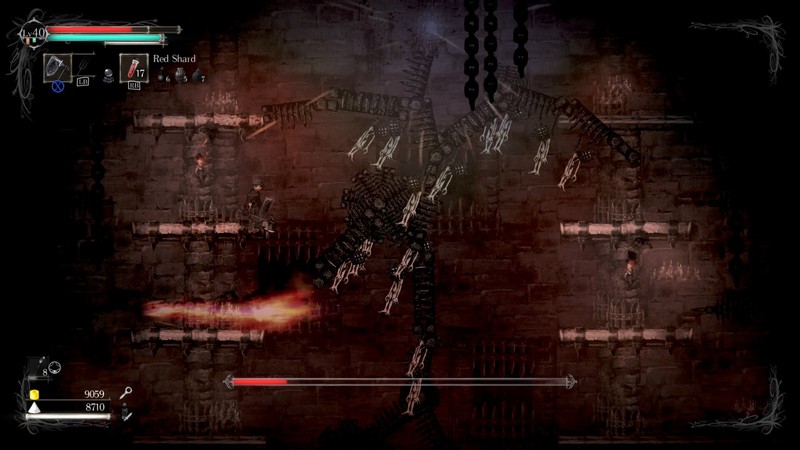 The level designs lack that sense of personality that we saw in the Souls series. Granted, being in 2D isn’t helping, but there is a lack of variety present.  Some areas are very long, while others only take a few minutes to reach the boss.

Case in point, one area took me a good 50 minutes to explore in its entirety, and another took me about 10.

This also presents an issue with the unlocking of shortcuts through areas. They don’t appear to be created logically within the gamespace.

I ran into some shortcuts that I never used, while others became vital for getting around. Salt and Sanctuary features a lot of backtracking minus free bonfire warping from the Souls series or any kind of in-game map; making it easy to get lost.

While the game boasts a lot of items to find, it was very hard for me to find new gear. The reason for this comes down to the Sanctuary mechanic and the game’s other major problem.

Salt and Sanctuary, while not directly designed to be a Souls game, was certainly imagined as an homage. The developers wanted things to be mysterious and let the player figure them out on their own. Unfortunately, they made a critical mistake: Confusing being mysterious with just hiding information.

The mechanics and systems were not explained well at all. There were cases where I couldn’t use weapons one-handed, without any explanation why. The game doesn’t have a help system like in Souls to explain what the stats do. Weapons do different kinds of damage to enemies, but none of that is referenced in-game. 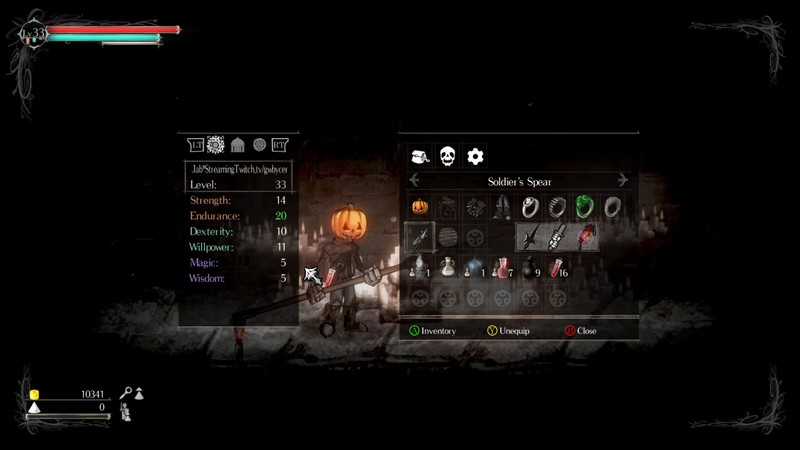 The sanctuary mechanic leaves a lot to be desired and makes things even more frustrating. The game asks you to use your limited supply of idols to figure out what they do.

It took me several hours to figure out what the stone leaders were used for and how to enhance things with loot from enemies.

Here’s a perfect example of hiding the rules: When I got to the first brand upgrade, I had no idea that there was even a system in the game.

I had to talk to the person multiple times, without any reason to, in order to get the option. Those kinds of arbitrary decisions are not good game design, and don’t represent an organic learning of the rules.

Salt and Sanctuary isn’t a bad game by any means, but it’s one of those games that comes so close to greatness. The Souls formula is one of those things that will make a game — or break it if you get it wrong. The game has the basic parts parts right, but misses the execution that has helped Soulsborne thrive.

I wouldn’t recommend Salt and Sanctuary if you’re looking for a Souls-like experience, but more of a hardcore take on Metroidvania.

If you want to see the game in action, be sure to check out my let’s break of the game.