Around the Jones household the winter is usually prime time for solitaire wargaming. It’s been so ever since John O’Neill and E.E. Knight got me hooked on board games again. And the last two winters the first game I pull out is DVG’s Hornet Leader.

It’s a bit of an odd fit for me, because I’m more of an ancient history guy, and Hornet Leader is all about modern(ish) planes. A lot of its setup is concerned with the differences between types of armaments, which I’ve never been remotely curious about.

Yet the game had such rave reviews from sources I respect that I finally got over the hurdle of disinterest in the subject matter, picked up a copy, and sat down to play. After some trial and error I discovered a grand game. If you like puzzles with a war or tactical theme you’re liable to find yourself captivated. And if you’re one of those who’s already interested in modern planes and the weapons they carry, you may be in heaven. (If this all sounds of interest but you’re more of a speculative fiction person, you might be curious about its expansion, which I’ll introduce at the end of the review.) 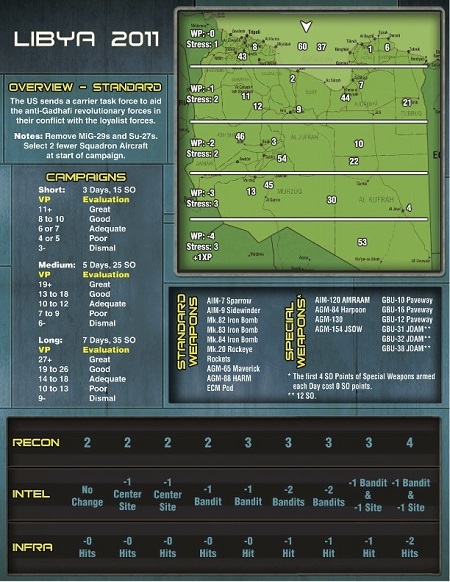 Central to the game is the campaign you choose — and there are many of them — and your pilots. Each campaign – say, Libya, 2011 (one of the free downloads) – has certain requirements, for instance how many pilots you have, how skilled they are, which targets are close, near, or long range, what sorts of planes are available, and what kinds of weapons those planes may carry. There are plentiful target cards, drawn randomly, but not all cards are included in every campaign. Additionally, each campaign has three lengths (short, medium, or long) and three tracks that effect game play: Infrastructure, Intel, and Recon. As you destroy targets, the numbers on those tracks change, meaning that, for instance, you get less opposition as the war takes a toll on the opposition and you have more targets to select from.

But as the war rages it also begins to take a toll on your pilots. They accumulate stress, which interferes with their ability to continue to fly. And if you make the wrong choices or roll badly, then you may lose the plane and pilot — although there’s a chance you can recover them when they’re downed. 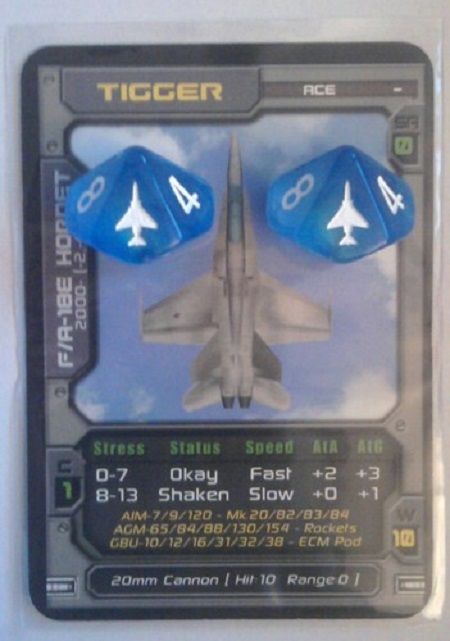 One of the most compelling features of Hornet Leader‘s game play are the pilot cards, which provide a role-playing element. Each pilot has six different skill levels, ranging from newbie to ace, and as they fly missions their experience levels improve. They might start out as newbies, but once they accumulate enough victory points, they advance, meaning that their abilities (like coolness under fire, air-to-air modifier, and air-to-ground modifier) get better. Watching them advance, and crossing fingers that they’ll survive their run over the target to do so, gets you invested in their fates.

Not all pilots improve in the same way or at the same speed, and each has different strengths and weaknesses. Moreover, you start each campaign with several pilots at different levels of ability – so many at newbie, so many at green, a few veterans, and maybe an ace, along with the levels between. Not all planes are available for every campaign either — you’re given a huge selection of different models from different years, and each has different strengths and weaknesses. You can even choose between flying a Navy campaign or a Marine campaign, featuring the famed Harrier jump jets. 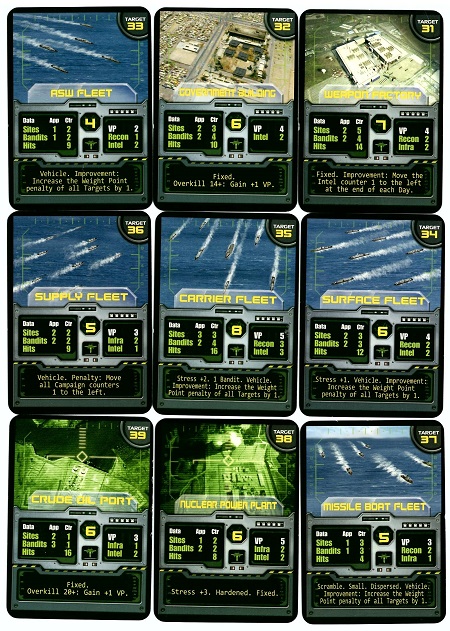 Each campaign consists of the drawing of multiple targets over multiple missions, which are printed on cards. Normally several target cards are drawn before each flight and you choose the one you wish, although some target cards present you with situations that must be addressed immediately, and others continue to have an effect on game play until the card’s target is eliminated. For instance an enemy airfield might increase the amount of enemy planes you face off against during each mission.

On the way to the target, you draw from another deck to see if there are any unexpected events, and you randomly determine the target’s defenses as well, be they extra enemy planes or missile installations. And that, of course, is where the challenge lies, because while each target has a predetermined amount of defending planes and anti-aircraft installations, event cards might alter their numbers or add other surprises that suddenly throw wrenches into your plans. In other words, you’ll have to improvise a way to overcome the new obstacles. 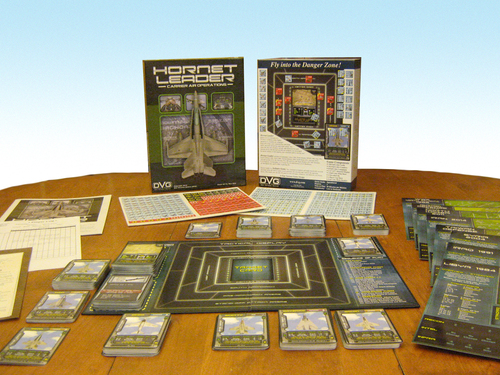 The result is a lovely tactical puzzle/brain burner for every mission. As the campaign advances a narrative develops and if you’re not careful (frequently I’m not) you find yourself setting up for the next mission and then playing it, and then telling yourself you’ll just set up for the next to play for tomorrow and then playing it… Moreover, there’s just a lot of variety in the number of campaigns, for each has different situations further changed by permitted plane and armament types,  not to mention the endless randomization of those die roll results. You can see the campaign cards in the right of this accompanying image, and even a handful more are available online (not to mention some user-created campaigns available at Board Game Geek).

I should confess that there’s a learning curve and that as I worked through the game at first I found myself a little overwhelmed. Once you’ve played a it all makes perfect sense, but it can feel somewhat intimidating when you start. Fortunately there’s a good walkthrough in the rulebook, and Board Game Geek features a number of video playthroughs, which are the next best thing to having a friend show you how it’s done. I highly recommend purchasing an inexpensive counter tray to keep the cardboard counters organized, or it becomes a game of “sort the pieces” every time you outfit your planes. 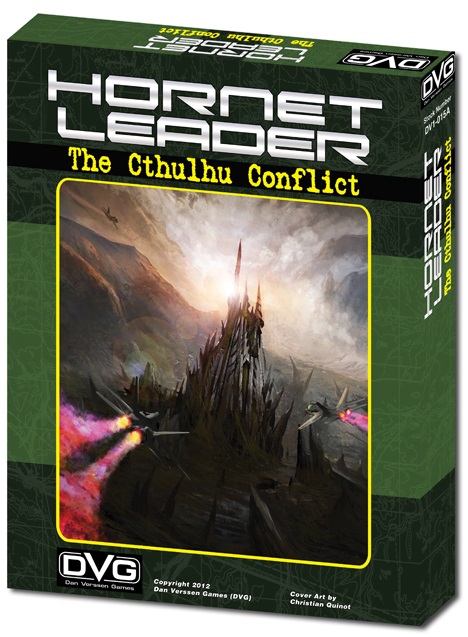 Hornet Leader is available in a variety of places for a wide range of prices. It should be mentioned that while it’s marketed as a solitaire game, it’s possible to play it as a cooperative game with two or three people handling several pilots a piece. It also has an expansion: Hornet Leader: The Cthulhu Conflict, that enables you to lead your pilots on four campaigns set after the island of R’lyeh has risen from the cold depths of the South Pacific!

If the game system’s of interest, there are other Leader titles, including Phantom Leader (set in the Vietnam era), and Thunderbolt-Apache Leader, said by many to be the best Leader game in print, where you manage air-attack vehicles over randomly generated terrain. I haven’t yet played either of these, or the Cthulhu expansion, but I liked Hornet Leader so much I saved up my shekels to buy them! If that’s not a vote of confidence, I don’t know what is.

Two more air Leader games are in production, Israeli Air Force Leader and B-17 Leader, which has a very different rules engine. Heck, I liked Hornet Leader so much I ended up as a playtester for B-17 Leader!

Other Leader games take you below the waves in World War II (U-Boat Leader and Gato Leader) and others put you in command of land forces during that same war, Tiger Leader and Sherman Leader, which is currently being Kickstarted. I hope to talk with game designer and publisher Dan Verssen in the coming days so he can tell you a little more about this entire series.

I have the original GMT editions of Hornet Leader and Thunderbolt – Apache Leader. They’ve gotten a lot of play from me over the years. It really is a great system, fast moving and different every time.

I can’t believe they have a Cthulhu expansion!

Hornet Leader is a favorite for me as well. I would love to talk to the DVG kahuna and see what else is coming down the road. I am anxiously awaiting B-17 Leader. One of my all time favorites was B-17 Queen of the Skies and I hope it compares to that classic.

@John—The Cthulhu expansion is a must. It is too light on the tentacles but it makes up for it in game fun.

B-17 Leader is a blast. You’re MUCH more in command of the story than you are in B-17: Queen of the Skies. The mini-game that’s included in the main box has some of that exact feel, but for the main game you’ll find that you have much more control over what you’re doing — target choice, armament choice, number of planes being sent against the target, whether or not you have fighter escorts, etc. And you’re controlling both the bomber and fighter groups and rolling attacks for them both.

[…] to set the game back up every evening to play a new mission. Oh, and on Black Gate the other day I finally posted a lengthy review of HL which explains why I enjoy […]