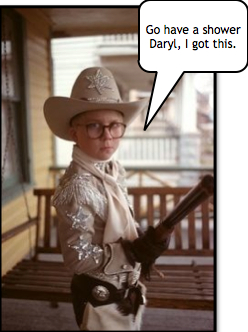 Much like bacon, we here at Goth Chick News think everything is better with zombies. Pride and Prejudice was better. Brad Pitt was way better. And even Romeo and Juliette was a bit better, in a dead-guy-falls-for-living-girl kind of way.

But honestly, even we were skeptical that zombies could improve upon what may be the best holiday movie ever: Bob Clark’s classic A Christmas Story.

Thanks to Buzzfeed’s Jesse McLaren, those of us who have fantasized about Ralphie turning his Red Ryder against the undead have received this 30-second gift via YouTube last week.

I’ve always been a huge fan of Bob Clark’s original 1983 holiday film, and I was interested to learn that very same Bob Clark directed several horror movies prior to A Christmas Story, including Black Christmas in 1974; which was about as far from charming and innocent as you can get. This seems like a non-sequitur until you consider Clark also directed Porky’s and Porky’s II.

Which just goes to prove, the idea of the holidays can bring out the kid in any of us.

Well, some of us.

Happy Holidays and a Wonderful New Year from all of us at Goth Chick News.

GCN will be on hiatus until January 5th while we dig around in New Orleans looking for all manner of spirits. Until then, post a comment or drop a line to sue@blackgate.com.