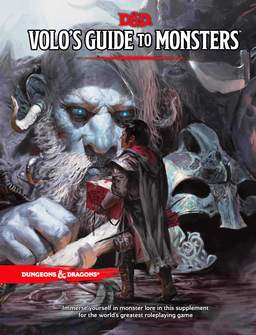 At this point there have been scads of manuals with monsters for Dungeons & Dragons, going all the way back to the ’70s and that little booklet titled Monsters and Treasure. But last month a new kind of Monster Manual for 5th Edition Dungeons & Dragons crept onto the scene, and it’s different from any official D&D monster book that I’ve ever held.

You don’t often see the word “innovative” anywhere close to the word “monster” but I think I might just have to try it: this is an innovative look at how to use monsters in a D&D game. And if 5e isn’t your thing, it could be of use in most retro-clones and related D&D-like games as well. It could help your local DM bring the game’s monsters to more terrifying life.

It’s not just about monsters as stat blocks. It even begins with a framing story, in that it’s purportedly a lore book from a scholar of the fantastic and bearer of unlikely names, Volothamp Geddarm. Some reviewers seem to have been disappointed that Volo’s own comments (as well of those of a dissenting scholar) are only peppered through the manual, having seemingly missed that a manual written entirely by a biased and unreliable narrator might render all its information questionable while in game.

The book is divided into six broad sections, and, unlike the 5e Monster Manual itself, is well-indexed. Not only is there an index of monster stat blocks, there’s a list of the lairs in the book, and Appendix C provides listings of creature by type, by challenge rating, and by environment. Hopefully somewhere online there’s an official listing of ALL 5e monsters listed by these categories, for the ones in this book cover only the creatures included within.

The most innovative material is right up front, in Chapter 1, “Monster Lore.” Almost 100 pages are given over to detailed looks at 9 kinds of creatures and their sub-species, including famed beasties like the Beholder and Mind Flayers. Typical lairs, behaviors, characteristics, and variants are presented in engaging ways.

For instance, in the sub-section on giants, there are four lists that can help generate guidelines on properly presenting a giant — Personality Traits, Bonds, Ideals, and Flaws. One of the randomly generated Ideals is: “Skill. What sets my clan apart is its master of our traditional crafts.” And one of the randomly generated flaws is: “Ancient Dragons fill me with dread. My knees grow weak in their presence.” 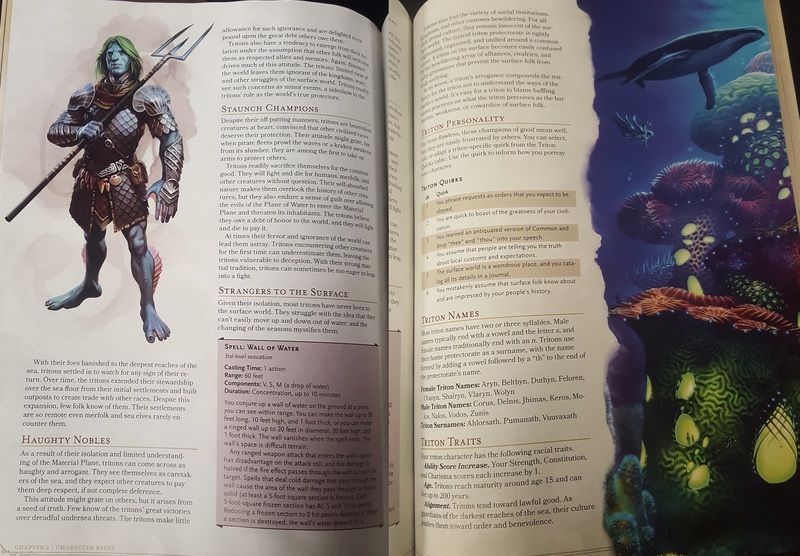 Sample names are included with the creatures, and all sorts of background details are supplied so that they can become much more than blocks of numbers to whomp on. This lengthy chapter is sure to inspire more story development, suggesting new challenges, opportunity, and even sense of wonder (and in some cases horror). Maps of lairs/settlements aren’t provided for every creature, but those included are colorful and chock full of ideas that will heighten adventure creation.

With Chapter 2, the next 20 pages are given over to turning seven monsters into playable character races, including one of my own favorites, the lizardfolk, not to mention the perennially popular cat people, or as they’re known here, Tabaxi. The game rules for these creatures are there, but of greater interest are descriptions of their behaviors, personalities, potential quirks, and other guidelines for playing them as distinctly different from existing player races. 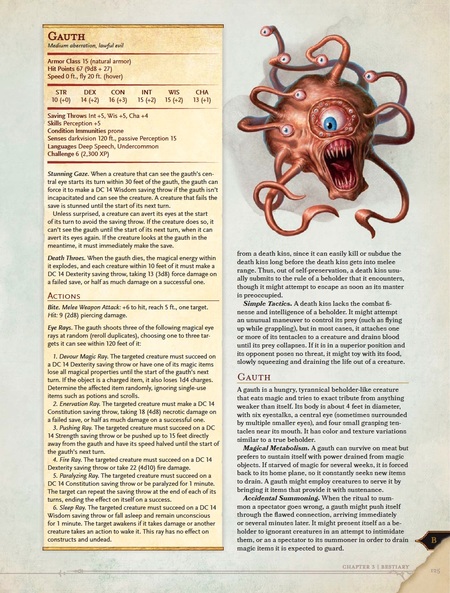 In Chapter 3 the book finally begins to resemble a standard monster manual, in that you’re presented with an alphabetical bestiary. Some are old stalwarts (like the Catoblepas or Ki-Rin) that haven’t been converted before to 5e, others are variants, like several new Beholders, but many are entirely new. More familiar creatures, like dinosaurs, are given little detail, but the original and unfamiliar are described with behavioral guidelines and characteristics that exist beyond the game stats.

Some reviewers have noted that there aren’t any new dragons or devils within Chapter 3 and that the majority of the monsters are low to mid level. While that’s true, I’m not sure it’s a problem. Most of the fun I’ve had gaming occurs in low to mid level, and it’s always good to have something new to present to players apart from more kobolds (although this book makes kobolds MUCH more interesting). And as to dragons and devils… there are plenty of them already, really. Besides, maybe the D&D folks have more of these sorts of books on the planning board. 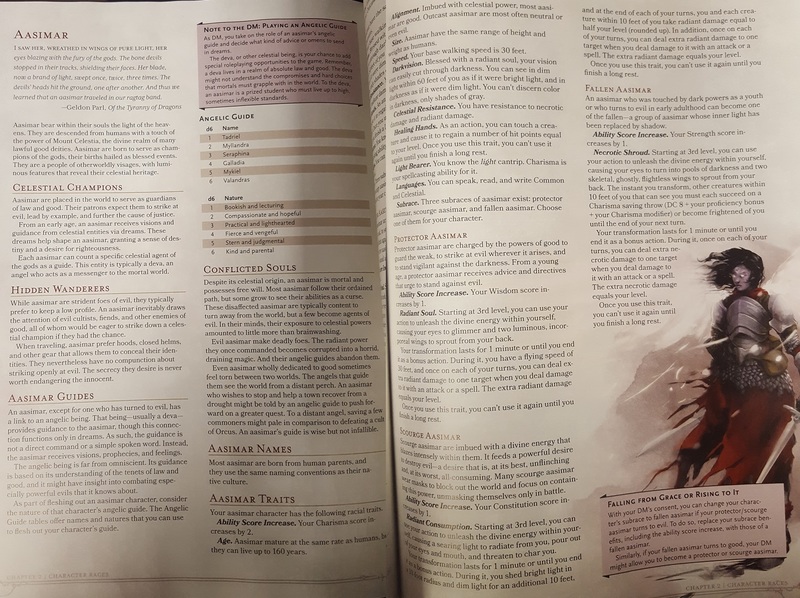 The book closes out with the aforementioned indexes and several appendices. The first, short appendix presents ordinary beasts, like cattle and dolphins, then Appendix B provides a wide and useful selection of common non-player characters with statistics, including apprentice wizards, champion warriors, swashbucklers, archers, and many more, clearly designed to save the DM time.

In sum, this is a great addition to any DM’s library. Whether you’re using 5e or some compatible system, you’ll find yourself inspired by the countless clever ideas inside. The information fleshing out Beholders and Mind Flayers might be worth the price of admittance all by itself, but fortunately the creativity found in those sections is apparent upon nearly every other page of the book. I hope lead designer Mike Mearls is allowed to apply the same vision to forthcoming products. 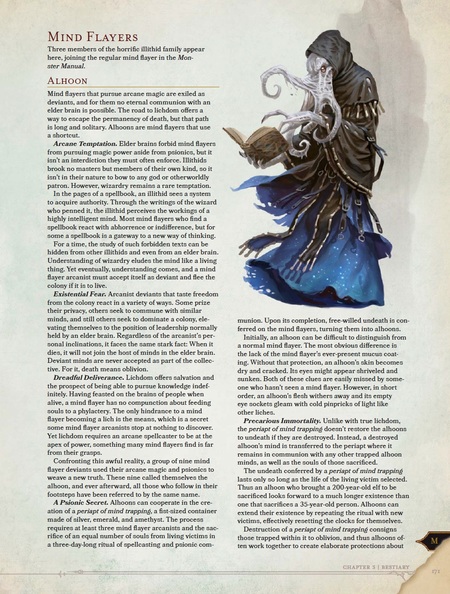 Volo’s Guide to Monsters retails for $49.95 at most book outlets, but can be found more inexpensively through some online vendors. The award-winning Tyler Jacobson painted the striking cover.

Hearing them talk about this on the D&D podcast, it’s tempting me to switch from C&C back to D&D. (Then I remember that I don’t really get to game anyway, so I should save my money.)

While I think 5E is a pretty great system, I’m a C&C player myself. The nice thing about C&C is that it can work with about any D&D ruleset, and if anything 5E is more compatible with it than 4 or 3.x. The monsters and info within Volo’s Guide would work perfectly fine with Castles & Crusades if you don’t want to switch.

As another Grognard who rarely (if ever, it seems anymore) gets to play, this approach to a Monster Manual sounds much more entertaining.

Many THAC0s for the review,
Anthony