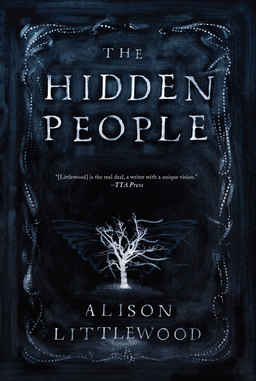 I admit the recent mini-boom in “pioneer fantasy,” which drops readers into a world of dark superstition, has a lot of appeal to me. Much of it is set on the American pioneer, but not exclusively.

The latest entrant is Alison’s Littlewood’s (A Cold Season, The Unquiet House) newest fantasy The Hidden People, which is set in rural Britain in the 1850s, and which Booklist calls “The perfect book to curl up with on a chilly fall day… will make the hairs on the back of your neck stand up.”

In 1851, within the grand glass arches of London’s Crystal Palace, Albie Mirralls meets his cousin Lizzie for the first — and, as it turns out, last — time. His cousin is from a backward rural village, and Albie expects she will be a simple country girl, but instead he is struck by her inner beauty and by her lovely singing voice, which is beautiful beyond all reckoning. When next he hears of her, many years later, it is to hear news of her death at the hands of her husband, the village shoemaker.

Unable to countenance the rumors that surround his younger cousin’s murder–apparently, her husband thought she had been replaced by one of the “fair folk” and so burned her alive — Albie becomes obsessed with bringing his young cousin’s murderer to justice. With his father’s blessing, as well as that of his young wife, Albie heads to the village of Halfoak to investigate his cousin’s murder. When he arrives, he finds a community in the grip of superstition, nearly every member of which believes Lizzie’s husband acted with the best of intentions and in the service of the village.

There, Albie begins to look into Lizzie’s death and to search for her murderous husband, who has disappeared. But in a village where the rationalism and rule of science of the Industrial Revolution seem to have found little purchase, the answers to the question of what happened to Lizzie and why prove elusive. And the more he learns, the less sure he is that there aren’t mysterious powers at work.

Behind the book: The Hidden People | Alison Littlewood