Normally “the season” comes to a close each year with Black Gate photog Chris Z and I sharing a mid-morning Fireball shot before wading into the Days of the Dead show in early November. And so it appeared would end the 2016 season… until Chris Z came across an ad for a local event called the Chicago Pop Culture Con.

Intrigued and not quite ready to trade skeletons and zombies for chubby dudes in red suits, I contacted show organizer Tim Zurko of Zurko Promotions to see if we could come round to have a look. I mean, who knows? Regional shows such as this one in the (very – no, I mean very) far western suburbs of Chicago could yield one or two tasty tidbits to share with you, our beloved readers.

And what did we find out there at the Pheasant Run Mega Center in St. Charles, IL?

It’s not that we don’t dearly love our “show family” of artists, authors and vendors we regularly commiserate with during our annual rotation of trade show events. On the contrary – their creativity provides an endless source of Goth Chick News material each and every year.

But here at this first-of-its-kind event in a rather unlikely location, we collected a plethora of material from an entirely unique crowd that left us wondering how a horror subculture could have existed (nay, thrived) this far out in the sticks and yet escaped our notice?

Thank you Mr. Zurko, for definitively answering that question.

I must say I’m a tad giddy paging through my collected notes and business cards, as it has been some time since I’ve had more material than could reasonably fit in one post. But so geeked are we to share all the great things we saw and people we met, that I will gladly torture our web master by crushing it all in, complete with Chris Z’s fabulous photos.

So let’s get going shall we?

Matthew Edwards (aka The Lone Star Joker): Okay who doesn’t appreciate a good cosplayer, especially one who looks so authentic that they might have wandered off a movie set in search of the craft table? Believe me; we’ve seen more than our share but The Lone Star Joker is at the top of our list for certain.

This isn’t your meth-lab psychopath Joker, or your suicide squad insane Joker – nope this is THE Joker; he of the BAM! POW!-Batman’s-arch-enemy-in-3D-comic-color Joker and I’m sort of in love. Edwards is currently promoting an event he’s doing with Stan Lee called Nerd Year’s Eve in Dallas, TX and you can follow him and his fellow (hard core) Marvel cosplayers via his FB page.

If only I were still single… 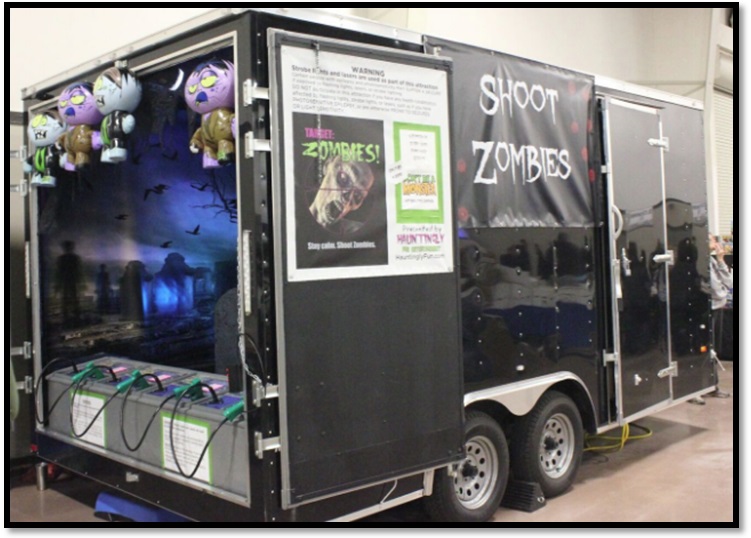 Target Zombies by Hauntingly Fun Entertainment: I will admit straight away that when we walked in and saw this, it was all Chris Z could do to keep me from whipping out my Black Gate Master Card, then backing up my car to make this my own.

Standing at the gates of the cemetery, eerie quiet sets in; the calm before the storm. Oh, it is more than a storm. It is an apocalypse.

They come all at once. One breaks through a wooden casket, another rises from his grave. Tombstones are busted, crypts are opened, the skies are parted… Zombies are everywhere.

Target: Zombies is a laser shooting game that is entirely mobile. Built inside of a 16’ trailer it contains fully animatronic zombies complete with professional sound and lighting. Which means this little bit of undead paradise is coming to my house for my next event – like Christmas Eve at my sister’s…

Artist Rich Keylard: Best known for his amazing airbrush art and restoration work, Keylard’s company Airephix has a holiday gig that is my new obsession. We stood mesmerized watching Keylard freehand paint on round glass ornaments.

And was he painting candy canes and Christmas trees?

Nope, Keylard was hand painting a bewildering array of movie monster characters in loving detail, on the surface of dainty glass orbs. The original Bride of Frankenstein, Wolfman and Dracula were represented, as was Freddy, Jason and the “Bumble” from Rankin and Bass’ Rudolph the Red Nosed Reindeer. Not only that, but Keylard will produce any character you can think of, and he was busily doing just that for a “while you wait” crowd around his booth. This is a holiday gift with unlimited possibilities so don’t delay – check out his FB page where you can also see samples of his work and contact him for your own custom design– he ships anywhere. And yes, I scored a Dracula and Bumble for my own holiday décor… 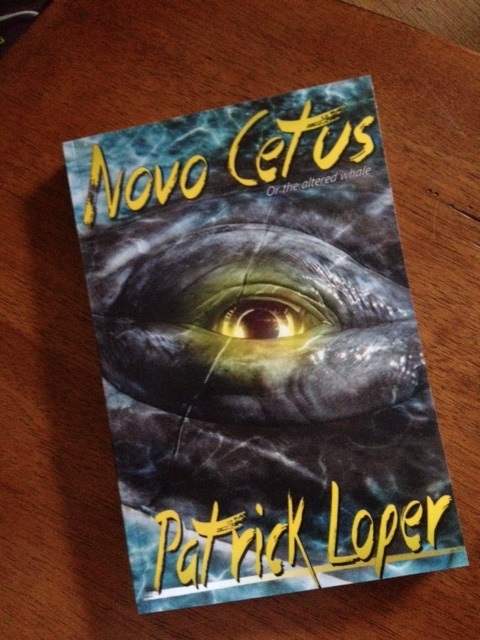 Novo Cetus by Patrick Loper: As you well know, everyone here at Black Gate loves nothing better than discovering a yet-undiscovered writer who is trying something different with his storytelling.

When a sperm whale calf is separated from his pod during a hurricane and swept into the wake of a research submarine it is exposed to experimental nano machines and become a living weapon.

Deep in the Pacific Ocean, submarines wait like snipers for the go-ahead to destroy the threat they are targeting. Simultaneously, scientists scramble to determine the origins of the beast and one scientist in particular needs an answer to the deadly secret he keeps.

Novo Cetus is a fast-paced techno-thriller set in the near future. It is a harrowing tale of military science gone wrong—where a bionic whale, three scientists, and a traitorous plot intersect. And it’s available now via Amazon. 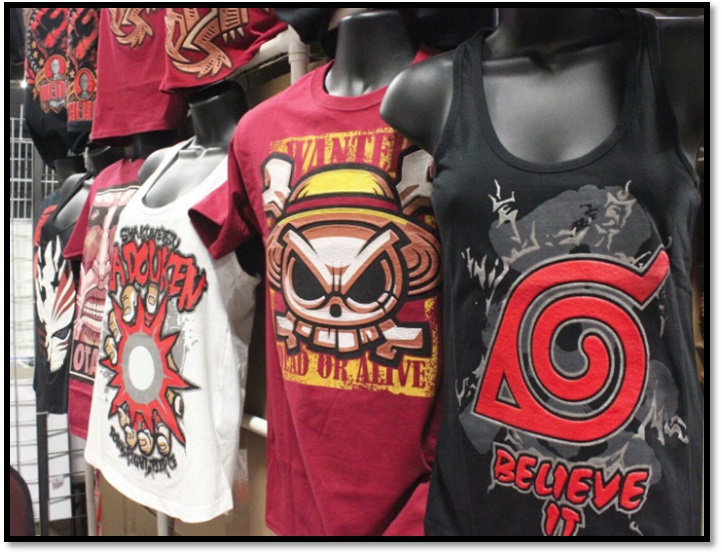 J&R Fan Art: Started by John & Richie, two naïve brothers who believed that being a geek and doing what you love can actually make a living

Soon after school, J&R realized that they didn’t want to slave away in a cubicle for their entire lives, goofing off on reddit at work, so they packed their PB&J sandwiches and went to Asia, for a boot camp of a life time…

They traveled to Fujian, an ancient city of Southern China that has been known for its mastery of screen printing. Under the mythical Mount Baogai, they beheld the legendary Seven Rainbows, an establishment that houses all the best printers of the land. And it was under this roof that J&R were trained to become print masters.

Now J&R prints and produces some of the world’s best quality t-shirts and they’ve dusted off all those old textbook to share with the world the joy of fan art on puffy print!

Okay – this is a load of BS from their web site. Truth is, J&R (not sure who we met – “J” or “R”) have taken logos from Chinese anime and printed them in 2D tactile puffy goodness, onto high quality tees that are truly unique in the US market. We loved all of their designs and we each scored shirts for ourselves and as gifts. You can do the same via their web site and if you hurry, they’re running a $20 holiday special. 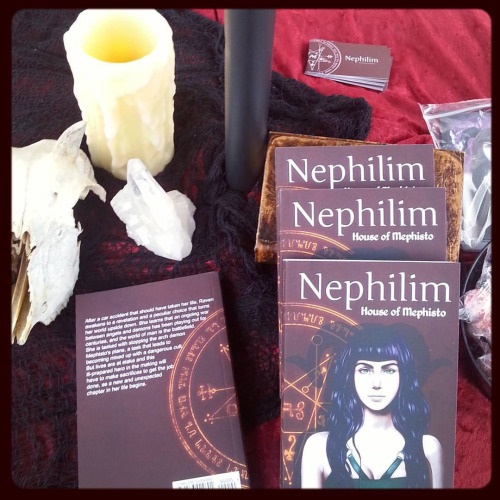 Nephilim: House of Mephisto by Mandy Madrox: Because we goth chicks can pick each other out in a crowd, I was immediately drawn to the table where Mandy Maddox was promoting her own self-published novel.

Nephilim: House of Mephisto tells the tale of Raven who awakens after the car accident that should have taken her life, to find herself faced with a revelation and a peculiar choice that turns her world upside down. She learns that an ongoing war between angels and demons has been playing out for centuries, and the world of man is the battlefield. She is tasked with stopping the arch demon Mephisto’s plans, a task that leads to becoming mixed up with a dangerous cult. But lives are at stake and this ill-prepared hero in the making will have to make sacrifices to get the job done, as a new and unexpected chapter in her life begins.

Madrox is working on making Nephilim a series but her goal isn’t to write the “next big thing”, she just wants to tell a good story and from what I’ve seen so far, she definitely does that. Nephilim was released in May of this year, and is available on Amazon. 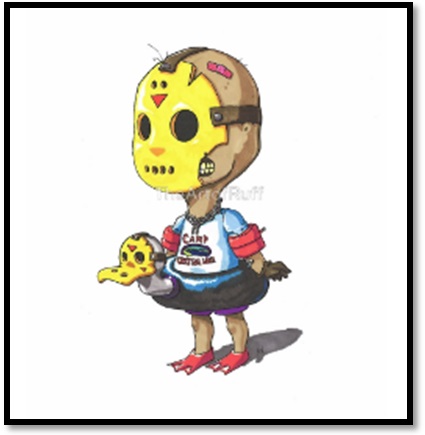 The Art of Ruff

The Art of Ruff: Comic artist Bryan Ruff has focused his considerable talent on creating a… well… ”cute” takes on our favorite horror icons. Imagine if the Cenobites hung out with the Care Bears for the weekend and things got “friendly.”

Actually, no – don’t imagine that..

Just feast your eye on these lethal little darlings then pick up a print or a tee-shirt via Ruff’s online store. Don’t see your fave? Drop Mr. Ruff a line and he’ll see what he can do to accommodate your custom request.

The last two items are so intriguing; I intend to keep them under wraps until I can reveal each in detail via a dedicated post. Both are indy TV programs created in the true spirit of “micro-budget” entertainment – short on expensive production values and extremely long on talent, creativity and humor.

Watch this space for behind-the-scenes coverage of The Deadersons (a family just trying to make the best of their undead life after a worldwide zombie apocalypse) and The World of the Weird Monster Show hosted by “Undead Johnny.”

How can I do anything but love my job?

So what do you think? Like us, are you in awe of artists and writers boldly pursuing their horror-filled dreams? Or were you thinking there’s absolutely no way John would have given us a Black Gate Master Card? You’d be right either way so go ahead and post a comment, or drop a line to sue@blackgate.com.