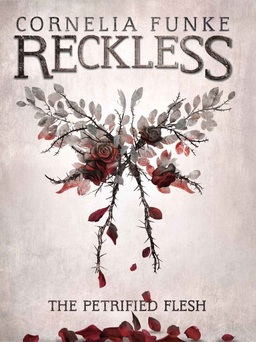 As you plunge into the into the depths of The Petrified Flesh, Cornelia Funke’s newly revised and updated first volume of her Mirrorworld trilogy, you start noticing things. Like that the two protagonists are named Jacob and Will and that they’re brothers with an undying love for one another. Unfortunately, that love has been thwarted by Jacob, the older of the two. For much of the time, he journeys through a treacherous and magical world which he inhabits with the help of a mirror located in their father’s study.

A shapeshifting vixen named Fox accompanies him on his journeys. His mother dies during one of his long forays into the world their father began calling home. When Will and his girlfriend, Clara, decide to follow Jacob into the unknown, a notorious Dark Fairy captures Will and leads Jacob’s band of friends into a perilous landscape conjured from the bubbling cauldrons of fairy tales. All the while, Jacob wrestles with his guilt over making his brother go through the same agonizing separation that he and his friends experience.

Funke does a masterful job at embedding her characters’ dark inner conflicts into the story. We feel for Jacob as he ruminates over his abandonment of his mother and brother. We feel for Fox, his shapeshifting companion, as she suffers through the agony of realizing she loves Jacob, while knowing he has nothing tying him down to her world. And we feel for Clara, who has her boyfriend torn away from her by a fearfully beautiful fairy for reasons beyond her comprehension. The fairy transforms Will into a jade goyl, which petrifies his flesh. The stone creature comes from a fairy tale, many of which are nestled into the story.

Fairy tale lovers will relish the generous references to beloved stories and the appearance of their characters. That the plot moves in the manner of a gorgeously realized fairy tale will not go unnoticed, either. Issues bigger than thwarted romance and revenge, such as prejudice, appear as well. The goyl and their struggle against humans comes off the page with a refreshing intensity and authenticity.

Arguably, Funke displays her masterful skills in characterization best with the Dark Fairy. Funke redeems her villainous deeds with such sensitivity and compassion that it left me in a state of silent wonder. Her villainess has a beating heart. Funke also has a way with making certain characters, such as the dark fairy’s sister, Miranda, more fearsome than they seem in passing.

That the characters are firmly rooted in a fairy tale setting means Funke sometimes tells their story more than showing it. In this regard, the storytelling loses its power now and again. Certain passages describing the emotions of the characters lack the thrilling and full-bodied luster of the rest of the book, as those emotions are flatly told to the reader, rather than shown via action.

One must remember that parents told fairy tales to their children by the fireside on winter evenings, and children often understand words more than actions. You can’t blame Funke for addressing the same audience that the Grimm Brothers captivated so many moons ago.

I recommend picking this up if you’re in the mood for something bold and new; something the Grimm Brothers could have compiled in the collection of fairy tales that captivated the world. Do yourself a favor and get lost in the best way.

Our previous coverage of the Reckless series includes:

Cornelia Funke Founds Her Own Publishing Company to Release Reckless: The Golden Yarn

The Petrified Flesh was published in the UK by Pushkin on September 29, 2016. It is 256 pages, priced at £7.99 in trade paperback and £3.79 for the digital edition. The cover is by Jing Zheng and Mathew Cullen.

Zeta Moore’s last article for us was The Fierce Love of Thieves: Thieves of Islar by James Shade. She is exploring work in care for individuals on the autism spectrum, and nerding out when she can.