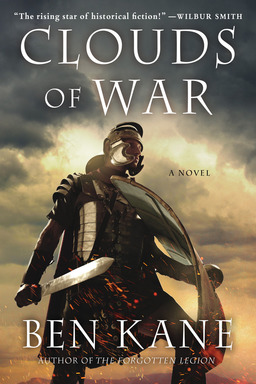 Ben Kane has been growing a rep for historical adventure novels. His Spartacus: The Gladiator was a bestseller in the UK, and his Forgotten Legion trilogy is a sword and sandal epic set in the late Roman republic ruled by the Triumvirate of Julius Caesar, Pompey, and Marcus Licinius Crassus.

Clouds of War is the third novel in his Hannibal series, following Enemy of Rome and Fields of Blood. It tells the tale of the greatest war of the ancient world, as the legions of Rome clash with perhaps the greatest general of all time, Hannibal.

In 213 B.C., as the forces of both Rome and Hannibal’s army from Carthage are still reeling from the losses at the Battle of Canae, the second Punic War rages on. With more and more of Rome’s Italian allies switching allegiance to Carthage, the stakes continue to increase. When the major Sicilian city of Syracuse defects to Hannibal, Rome sends all that it has to retake the city. Now, outside the nearly impregnable city walls, a vast Roman Army besieges the city. Inside the city, tensions and politics are an even greater threat.

Two men ― once boyhood friends, through circumstance now find themselves fighting on opposing sides ― are about to face each other once again. Caught between them is a woman. All three trapped in one of the most famous and brutal sieges of all time.

Ben Kane’s Clouds of War is a vivid, exciting, and very human novel about one of the most defining conflicts in history, seen from the very top, where the generals make bold gambits, all the way down to the very bottom, where the people who are caught in the crossfire are trapped.

I’ll have to read his Hannibal series. I wanted to start reading the Eagles of Rome series but apparently it isn’t for sale digitally here in the States.

The Forgotten Legion series was really good so have high hopes for this.