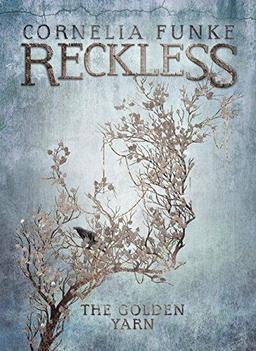 Cornelia Funke is the international bestselling author of the Inkheart trilogy and more than a dozen other novels. Her latest to arrive on American shores is the third book in the popular MirrorWorld trilogy, which began with Reckless (2010) and Fearless (2013). It didn’t arrive without some bumps on the way, however. According to Publisher’s Weekly, Funke was so upset by her publisher’s suggested changes to the book that she formed her own company to release it.

At issue was a request by Funke’s publisher Little, Brown, to move the first chapter… to a different place in the book. After returning from a book tour in Germany where her publisher had released The Golden Yarn this February, Funke says she was “stunned” by the email she received from her editor at Little, Brown in the U.S., who she says was also speaking on behalf of the author’s U.K. editor. “It said, ‘We love the book, Cornelia, but could you please change the first chapter? It’s a birth scene. That’s a little drastic for our audience. Could you please put that somewhere else?’”

The opening chapter describes a dark faerie watching a princess give birth. “It’s about love,” says Funke, from her Beverly Hills home. “And it’s about what love does to you, and it’s about the fruit of love – a baby. The golden yarn is the yarn that binds us to people with love.” Her publishers also objected to the “open ending” of the book and asked Funke to turn it into an epilogue instead. “And I love that ending,” says Funke. After discussing these issues with her agents, Andrew Nurnberg and Oliver Latsch, Funke made the decision to part ways with her publishers and launch her own publishing house for markets in the U.S. and likely the U.K.

Well, it’s not every author who can walk away from a lucrative publishing contract midway through a series, and more power to her. Still, there are good reasons to partner with a major publisher — and one of them is that they understand the American market. I’d love to see Funke succeed, but the packaging for this book isn’t going to help readers at all. I received an advance copy of the book, and the completed hardcover, and several photocopied articles and releases explaining what it was, and honestly I was still confused about what book I’d received.

That wouldn’t be so bad, except the previously announced title of the third book (and still the title of record at Wikipedia) is Heartless. Amazon makes no mention that Reckless: The Golden Yarn is part of a series at all. For most of the time I had this book, I figured it was just a reprint of Reckless, the first volume.

So for the record, here’s the titles of the three books in this series:

Because that might not be confusing enough for readers, Funke also totally changed the cover art so that it’s completely different from the previous versions.

It took double checking of multiple sources to figure this out — and I knew that the third book came from a different publisher. If you’re just a confused reader standing in a bookstore, hoping a smartphone and a search engine will sort it out, God help you.

In fact, if I hadn’t thought to check Cornelia Funke’s website, I’d probably still be confused. Here’s what you can find at her site, if you dig hard enough:

Dear MirrorWorlders of the English tongue!

I kept my promise. I founded my own publishing house, BREATHING BOOKS, to get the third adventure behind the Mirrors into your hands.

The official date is December 1st. We will start with a small print run on paper and of course there’ll be an ebook version. Both will be available at the usual sources. The book will be published as RECKLESS- THE GOLDEN YARN, as this is the original German title. It will include my illustrations.

I plan to relaunch Book 1 and 2 next spring with the new design, with the illustrations of the German edition and using the original titles: RECKLESS-THE PETRIFIED FLESH and RECKLESS-LIVING SHADOWS.

One more thing: I am currently revising Book 1 as I know so much more about MirrorWorld and the characters by now and will release a free download of the text in 2014 for all the ones who bought the old version. I also intend to open the chapters with fairy tale quotes (an idea I already had when I started the series), but let’s see whether I’ll be patient enough to find enough for three books

Welcome behind the Mirrors!
Cornelia

Well, finally makes sense. By the time she re-releases the earlier volumes, this mess will probably sort itself out, and readers will be able to find all three volumes with a minimum of confusion. Until then, good luck to you.

As I mentioned, the jacket copy text of the hardcover release makes no mention of MirrorWorld or the previous books. But at least the summary text at Amazon hints at them obliquely.

Jacob Reckless continues to travel the portal in his father’s abandoned study. His name has continued to be famous on the other side of the mirror, as a finder of enchanted items and buried secrets. His family and friends, from his brother, Will to the shape-shifting vixen, Fox, are on a collision course as the two worlds become connected. Who is driving these two worlds together and why is he always a step ahead?

This new force isn’t limiting its influence to just Jacob’s efforts – it has broadened the horizon within MirrorWorld. Jacob, Will and Fox travel east and into the Russian folklore, to the land of the Baba Yaga, pursued by a new type of being that knows our world all to well.

Reckless: The Golden Yarn was published by Breathing Books on December 15, 2015. It is 441 pages, priced at $17.99 in hardcover and $9.99 for the digital version. The interior art is by Cornelia Funke. The book was translated by Oliver Latsch.

See all of our recent book coverage here.