Here we come to the very last two issues of Amazing edited by Cele Lalli.

The editorials, as ever by Norman Lobsenz, consider the difficulty of accurate and precise time measurements, and a very brief discussion of David Bunch, the writer readers of Amazing and Fantastic loved to hate. Lobsenz quotes Bunch (“I’m not in this business… to entertain. I’m here to make the reader think… chastise him for the terrible… world we allow… The reader I want is the one who wants the anguish… All space must look askance at us.”)

This last Lalli issue was the last issue Bunch would appear in (not surprisingly) for over three years — he didn’t return to Amazing until late 1968, under editor Barry N. Malzberg — and the only one for which he had the cover story. (One suspects the June cover was partly Lalli and Lobsenz saying, “Heck, we don’t care anymore, we’re going to promote what WE like!”) The covers are each by Gray Morrow. There are only two interior illustrations, both in May, by Morrow and by Virgil Finlay.

The letter column is gone, again perhaps in view of the upcoming sale of the magazines. Robert Silverberg conducts the book review column, The Spectroscope, sharply and indeed acerbically, to good effect. In May he reviews an Avalon Books reprint of George Allen England’s Darkness and Dawn, a somewhat famous piece of proto-SF. Silverberg calls it “a cruel resurrection,” and indeed it does seem awful (and shockingly racist) as described. He also covers Walter Cole’s Checklist of Science Fiction Anthologies (with much praise) and The Worlds of Robert F. Young (“I am not fond of the writing of Robert F. Young” – given that Young was a Goldsmith/Lalli regular, this is a perhaps brave statement – and a sensible one!)

In June he covers Cordwainer Smith’s The Planet Buyer, speculating, in the midst of a very positive review, that “Smith” was actually a time traveler from the future. The other books covered are nonfiction work on the asteroids and Clifford Simak’s early novel Cosmic Engineers.

There is a science article in May, by Ben Bova, “Yardsticks in Space,” about how to measure astronomical distances. And there is a profile by Sam Moskowitz in June, about Charles Fort, called “Lo! the Poor Forteans,” taking a very skeptical, indeed jaundiced, look at Fort – not exactly Moskowitz’s usual attitude, seems to me, though perhaps not unexpected for the SF field.

The Corridors of Time is not one of Poul Anderson’s Time Patrol stories… not that you thought so, necessarily, but I did, until I read it, years ago. It’s pretty decent stuff, though. It opens with American graduate student (in archaeology) Malcolm Lockridge in the company of the beautiful and mysterious Storm Darroway, in Jutland, Denmark. She guides him into a mysterious underground installation, and before he knows it they are battling people in anti-gravity sleds up and down the title “corridors.” Soon she reveals that her people are in a battle with another group, led by the dangerous Brann, up and down the timelines. Storm is presented as an avatar of the Goddess of the Labrys, or of Diana – in support of emotional reaction and against technology, while Brann’s people believe in rational organization of human life, and each tries to promote their side in various historical eras. But they all know that they have no sway in the far future, access to which they are forbidden.

Lockridge is smitten with the incredibly beautiful Storm, but the reader soon realizes that she is dishonest and dangerous – while her rivals are not as bad as she says, but much mistaken as well. Much of the story concerns Lockridge’s time in a peaceful Bronze Age culture in Denmark, where he meets a beautiful chieftan’s daughter, who falls for him – if only he could forget Storm. Lockridge finds his loyalties in this time war tested, as he is kidnapped by Brann’s people and made to see to what lengths Storm and her people will go. The resolution is interesting and effectively twists through time, as Lockridge and his Bronze Age princess eventually struggle to find a middle way, outside the timeline battles. Good solid middle-range Anderson.

The serial is accompanied by a note stating that an expanded version would be published later in the year by Doubleday. And indeed, the book version is significantly longer, about 70,000 words versus 50,000 or so for the serial, and the differences show up immediately, as the book opens with Lockridge meeting Storm Darroway in prison – he’s been accused of murder because one of a group of local thugs who attacked him hit his head while falling and died. I noticed other spots in the serial where it seemed something had been skipped – I would say this is a clear case where the book is to be preferred. 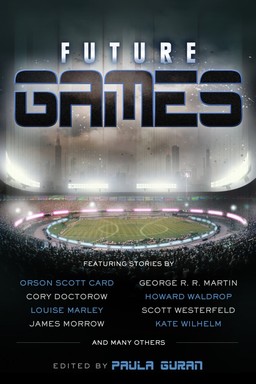 The real find for me in the May issue was Walter Moudy’s novelet “The Survivor.” This could easily have appeared, with trivial changes, in a 2016 magazine. It concerns what we would now call a reality show: a staged war in which 100 soldiers for the Soviet Union and the United States battle for economic benefits. The winning side gets a lot of money from the losing side, and any surviving soldier (the battle is over when all the soldiers on one side are dead) gets his own benefits: financial, no doubt, but mainly personal: he is now immune from prosecution for any crime. The story follows one American soldier, Richard Starbuck, as he experiences the battle, and, through sheer luck, becomes the only survivor, and therefore the reason the US wins. The denouement is inevitable, and shocking, and only too believable. The telling is effective, particularly in its depiction of the “expert” commentary.

It’s an excellent story. It wasn’t ignored – Judith Merril picked it for her Best of the Year book – and it’s still remembered – Paula Guran reprinted it in Future Games as recently as 2014. Moudy himself had a very short career – three stories for Cele Lalli, one 1964 novel (No Man On Earth), and a later novella, published only after his early death in 1973, at the age of 44.

Robert Rohrer’s “The Man from Party Ten” was his second to last story – as noted before, Rohrer was a teenaged writer, who published in Goldsmith/Lalli’s magazines and in F&SF, before abandoning the field, forever, more or less when he went to college. (He became a journalist.) This story is efficiently and cynically told, about a man in charge of a war party during some sort of extended conflict, between nobles and peasants, who encounters a helpful household and takes hospitality from them. The resolution is shocking but, by then, pretty much what we expect.

“Over the River and Through the Woods,” by Clifford D. Simak, is a simple and nicely told, if never surprising, story about a couple of children who come to stay with an old couple sometime late in the 19th Century. But there is something a bit odd about the children… nothing that will surprise the reader. Not much to the story, but it’s worth the brief read.

From June, the cover story, David Bunch’s “The Walking, Talking, I-Don’t-Care Man,” is a pure Bunch Moderan story, with the narrator, ruling his personal castle, encountering a man/robot who just keeps walking, and refuses to stop, even as his path leads him right through the narrator’s property. It works pretty well, really, in a somewhat talky way.

“Rumpelstiltskinski,” by Robert F. Young, pretty well supports Robert Silverberg’s negative view of Young’s stories… This one recasts the Rumpelstiltskin story in terms of mid-60s geopolitics, to clumsily unconvincing effect, and leading to a flat and silly ending.

Judith Schrier published only this one story in the SF magazines, according to the ISFDB. “Satyr” is a pretty obvious look at a computer which falls in love with its operator – whoever that operator might be.

And, finally, a more significant story from Roger Zelazny, but not at all Zelazny at his best. “The Furies” concerns a mismatched set of pursuers – “the Furies” – trying to track down a pirate, Victor Corgo, who after his mistreatment by the Galactic authorities has turned traitor. We feel a lot of sympathy for Corgo, but also for his strange set of pursuers. Zelazny has lots of fun setting up this situation, and it’s colorful and interesting but in the end kind of meaningless. Not a bad story, but … no patch on almost anything else Zelazny published in these years.

Rich Horton’s last article for us was a Retro-Review of the November and December 1963 issues of Fantastic. His website is Strange at Ecbatan

I’m always glad to see these retro-reviews, especially when done with attention to detail like this. How eagerly the old sf fans must have awaited each new issue!