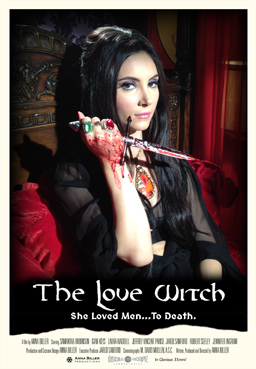 Last July, I was lucky enough to see Anna Biller’s film The Love Witch at Montreal’s Fantasia International Film Festival. After screening there and at various other festivals, it opens today in New York, with more cities to follow. Here’s how I described it back in August:

The Love Witch is a mix of horror, satire, and melodrama which follows Elaine (Samantha Robinson), a witch and murderess, as she moves to a new home and seeks love. Unfortunately for the men she desires, she’s both unforgiving and possessed of high standards. Any sign of weakness or emotional neediness is a sign of her partner’s unfitness, which she puts to an end both swift and fatal. Will Elaine finally find the man of her dreams? Or will her interest in Richard (Robert Seeley), the husband of her friend Trish (Laura Waddell), bring about her downfall?

I was tremendously impressed with it. As I wrote:

From the opening shots of a bright scarlet car driving along a California highway we know this is going to be a stylish treat for the eyes. Biller’s created a colour-drenched world out of a Hollywood melodrama, circa 1970. It isn’t set in that time — we get a few signs to the contrary, mostly in scenes involving policemen trying to figure out where all the dead male bodies are coming from — but it’s largely played that way, with sets and props evoking the period. More than that, there’s a mannered artificiality to the acting styles and dialogue that (I felt) mimics the specific artificiality of the late 60s.

The film is, of course and inevitably, terribly ironic. But the irony and the self-consciousness of the film still leave much open for interpretation. One of the fascinating, and indeed engaging, aspects of the movie is how it seems to invite multiple readings. How seriously is one to take any given element? Is Elaine hero or monster, self-actualised or brainwashed by stereotypes? Is witchcraft a salvific feminist power, or a delusive tool of men and patriarchy? Do we stand at a distance and laugh at the characters, or do we invest in their melodrama? It’s quite possible different viewers will have different answers to these questions, or the same viewer will have different answers after different viewings.

Above all, I’d say that this is a supreme technical accomplishment that is narratively involving even as it makes use of estrangement effects.

I’m glad it’s opening more widely, and I’m hoping more people will get to see it.

If it gets to DC, I will have to go see it. My ambivalence is so deep, I really ought to make sure it’s at least informed ambivalence.

It will be a smart movie, brilliantly made…that dresses a serial killer in the blue robes and cingulum of my religious tradition’s clergy. I don’t think anybody actually ought to make an analogous film and call it, say,

I would love to hear what you think of the film. I felt that there were some positive representations of Wiccans in the movie aside from the main character, but being a non-Wiccan I don’t know whether they’d feel to a believer like enough of a counterbalance — and, for that matter, I don’t know how the film would play to a Wiccan given the past history of negative depictions of Witchcraft. Compounding this, frankly, is the style of the film itself. It’s a highly ironic work, which to me made any single reading feel incomplete, as though the movie dared one to find a position that couldn’t be argued against. Like I say, I’d love to hear what you think of it, if you get a chance.

If I get to see it, I will definitely want to compare notes. Whatever I eventually make of it, I’m glad you called my attention to it.