For years now fans have been waiting for something to come of all the rumors regarding the Wesley Snipes, day-walking, bad-ass known as Blade.

In case you haven’t been keeping track, we last left the story back in 2004 with Blade Trinity, where personally I first learned to appreciate Ryan Reynolds on many levels, not to mention Dominic Purcell. Add in a fairly good storyline, an awesome soundtrack and a strong female character in the form of Jessica Biel laying waste with her compound bow and what you get is a movie that stands up quite well, a dozen years later.

But a lot of water has flowed under that particular dam in the interim, and Marvel may have trouble committing to another movie with Snipes in the lead role.

According to Patton Oswalt, who played weapons master “Hedges,” Blade Trinity was a troubled production indeed and Wesley Snipes appeared to have had some sort of mental breakdown during the shoot in Vancouver. He refused to speak to director David S. Goyer and often would not come out of his trailer; he would only respond to the name ‘Blade,’ and if he communicated with anyone, it would be via post-it notes. Ryan Reynolds corroborated this while promoting the film; saying that Snipes would ignore the entire cast, but he once acknowledged Reynolds by saying “Keep your mouth shut. You’ll live longer.”

Then, some years after a lengthy investigation, Snipes reported to federal prison in 2010 to begin a three-year sentence for tax evasion, which he completed in 2013.

Though the events are unrelated, it’s this history that probably has Marvel Studios pondering the search for a brand new actor to lead the Blade franchise in a fresh start. Not to mention, no matter how good Wesley Snipes may look at 53 (and he does), his age still puts the franchise’s future on a ticking clock if he returns.

But Hollywood loves nothing better than a comeback.

Earlier this year and seemingly at random, Snipes took to his Twitter feed, and posted the following message:

Marvel Studios received back the rights to Blade a couple of years ago, with rumors circling that the character could appear on a second run of Netflix series alongside other “Midnight Sons” characters like Ghost Rider, who also returned to the Marvel Cinematic Universe “rights stable” recently.

Marvel apparently invited Snipes to drop in for a Bloody Mary and talk shop sometime after, because Snipes started calling the press. That meeting centered on returning as Blade, but may have offered up other opportunities as well.

[Blade 4] is controlled by Marvel and we did have a really productive and a wonderful meeting and we discussed a number of things. I don’t know where it’s on their schedule at this point, that hasn’t been decided. I guess it’s still up in the air.

Coming into the Marvel Cinematic Universe another way “is a possibility too,” the actor said. “I’ve always been a fan of these pieces and adaptations and it’d be nice to be a part of the family again. But if we don’t to a Blade 4 or something else with Marvel, we’ll do something else.

So this is why last week it was great to hear a bit more concrete confirmation that Marvel is not going to just leave Blade as a trilogy. Ryan Reynold’s Deadpool released this year proved definitively, that we still want R-rated super heroes.

Bring us more weapons, more blood and more one liners, damn it.

The biggest rumor to date arrived with the news of a new Kate Beckinsale movie, Underworld: Blood Wars where fans speculated there would be a crossover between the two vampire fighters. At the New York Comic Con last week, Beckinsale was questioned about the rumor while attending a Lakeshore Entertainment Panel Q&A. When asked will there be a crossover with Blade she replied.

No. We had that idea. No. They’re busy. They’re doing something with Blade.

While this is far from confirming what Marvel is thinking of doing, be it a TV series for Netflix or a movie, we can now be somewhat confident they will be doing something.

At this point, with Marvel Cinematic Universe’s future in mind, it may be more prudent to find a new, younger actor to take the reins for an extended period of time, rather than casting Snipes and having to worry about recasting him sooner than if a younger actor took the role. 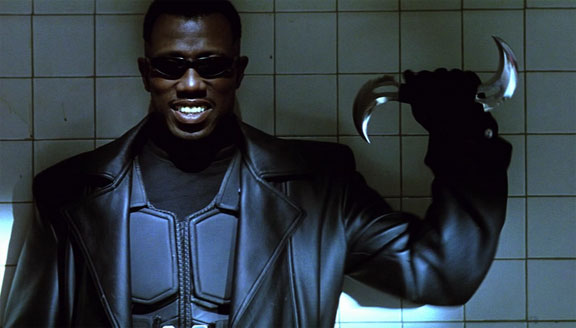 Still, if Arnold Schwarzenegger can still make Terminator Genisys in his mid-60’s, then there’s still a chance for a new Wesley Snipes installment of Blade.

I hate to seem cruel, but if Wesley Snipes plays Blade again in an MCU production, I’ll eat my hat.

1998 was a very long time ago. The ‘Maybe I’ll get to be Blade again’ idea seems to involve quite a lot of wishful thinking on Snipes’ part!

Here is the link to the article from Cinemablend where Mr. Feige doesn’t exactly put a stake in the idea, but it appears to be a lot less eminent than originally thought.

To Cephalophore’s point, looks like Wesley Snipes may be have been wishful thinking after all.

That being said, I’d love to see Blade in a future MCU production. Maybe they’ll consider making a couple of R-rated MCU movies with lower than average budgets. Or maybe they’ll give him his own Netflix series like Daredevil, Jessica Jones and Luke Cage. Hopefully Moon Knight would get similar treatment!

If there was going to be a Blade revival (because face it, at this point, that is what it would be), I would prefer it as a Netflix series. I will say that for 53 years old, Wesley Snipes is still in amazing shape and could likely pull it off but there would have to be an up and coming sidekick somewhere in the picture.

So anyone for a Snipes/Cage Blade/Ghost Rider team up? On that note, I can find the door myself.

You can’t leave now, I have a seasonal adult beverage mixing up in the blender with your name all over it.

We can drink it while discussing that delectable idea you just had.

…Wonder if it ever occurred in the ol’ “Marvel Team Up” type tomes of yore?

Thanks for the update!