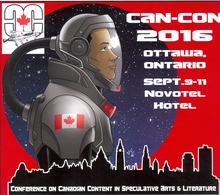 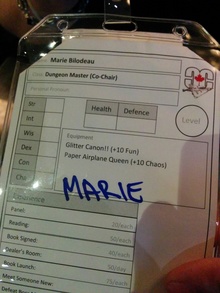 It’s a small con, as these things go, and as the full name of it indicates, its mandate limits it to speculative arts and literature in Canada – though I don’t think the attendees felt much in the way of limitation. There were workshops, and panels, and publishers and parties. The workshops covered building (both worlds and plots), researching the science, and  using mythic worlds. The organizers cleverly scheduled the workshops outside of the regular programming, so attendees didn’t have to choose between workshopping or panelling.
They also did something I’ve never seen before, they turned the entire con into an adventure game, where attendees who wished to could create characters, gain points by attending panels, book launches, getting autographs, etc, and then, with sufficient points, challenge monsters.

There were four tracks of panels, plus two extra tracks that covered readings, interviews, agent pitches, etc. The panels themselves covered topics as diverse as building a reading list to cultural barriers to translation, to Earth as a terraforming project, to superhero TV, to Lovecraft and Race – you know what? Check the website and go over the schedule yourself. I defy you to find an hour where there wasn’t something you would have liked to attend. 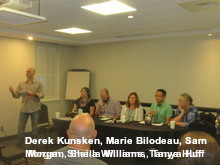 I wish I had the room to tell you about all the panels I attended, but I’ll concentrate on the ones I was actually on.

My first panel was “The Works of Tanya Huff,” and the first thing I noticed was that it didn’t include Tanya Huff. Then, it struck me: the presence of the author might place constraints on the panelists. Both audience and panelists had a great time, but there wasn’t much in the way of conflict, or controversy. No one had to defend Huff’s work against any serious criticism (“She should write faster ” does not constitute literary criticism) but I suppose that should be expected as well. After all, someone who didn’t like her work wouldn’t have read enough to warrant placing them on this panel.

Moderating the panel was Derek Newman-Stile, the Aurora Award winner behind the website Speculating Canada and its eponymous radio show, and my first choice for a moderator, ever, anywhere. He does a mean interview as well.

I myself moderated the panel “Adapting Literary Works to TV and Movies: Views from Writers and Agents.” Sam Morgan was there to fill us in on the process of selling written work to other media, and we heard from people who had short stories optioned (Ian Rogers), a series produced from their novels (Tanya Huff’s Blood Ties), and who had produced an animated series from their own comic books (Jay Odjick, Kagagi: The Raven). We talked about what kind of control an author retains (100% with Jay, as his own producer, to being able to write an episode [Tanya] to possibly being completely involved in the script writing [Ian]).

Later, I moderated “Emerging Issues in Publishing Contracts” which was, in a couple of ways, the most interesting panel for me. I was the only person at the table who has dealt with contracts purely as a writer. Sam Morgan was there to speak to the agent’s perspective, Sandra Kasturi, of ChiZine Press, is both publisher and author, as is Mark Leslie Lefebre of Kobo, while David Szarzynski is both author and lawyer. There were, of course, horror stories on all sides, as well as triumphs, but for me the most interesting point was David’s telling us of a contract where the author had the word “world” amended to “universes.” Please note, not “the universe” but “universes.” Plural. The contract was accepted by both parties. So the multi-verse has become a legal phenomenon.

Where else but an SF con could you hear this stuff?