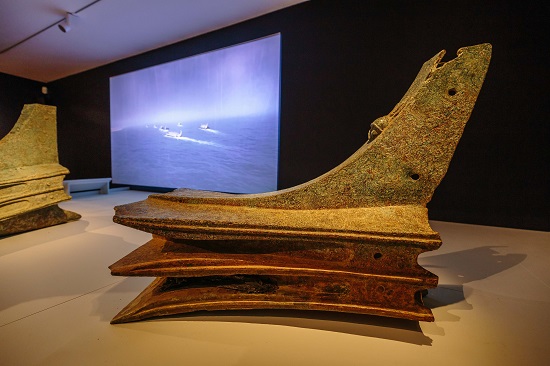 Roman battering ram from the Battle of the Egadi Islands. A bit
of wood from the targeted ship can be seen, still jammed in the lower portion

There are finds from about a dozen shipwrecks, the earliest being a collection of 70 terracotta cups and jugs dating to 2000 BC, found off Lipari Island off the northern coast of Sicily. They are handmade in the local fashion and may have fallen out of a shallow rowboat that capsized.

Sicily has been a rich hunting ground for underwater archaeologists. One amazing discovery has been the exact site of the Battle of the Egadi Islands, just off Sicily’s northwest coast, fought between the Roman and Carthaginian navies on 10 March 241 BC. It was the final battle of the First Punic War and an important Roman victory. A fleet of 200 Roman warships ambushed a convoy of 250 heavily laden Carthaginian warships. In the ensuing battle, the Romans sunk 50 ships and captured 70, while losing only 30 of their own. They seized control of Sicily and thus began to dominate the Mediterranean.

Archaeologists have carefully uncovered armor, amphorae, and eleven Roman and Carthaginian warship rams. Interestingly, while Polybius, writing a century after the fact, said the Roman ships were quinqueremes, the size of the rams suggest that the Romans also used smaller triremes. Archaeologists uncovered seven rams with Latin inscriptions and only one with Punic writing, odd considering that the majority of ships that sank were Carthaginian. It jsut goes to show that archaeological discoveries are affected by chance and you can’t make too much of statistics! 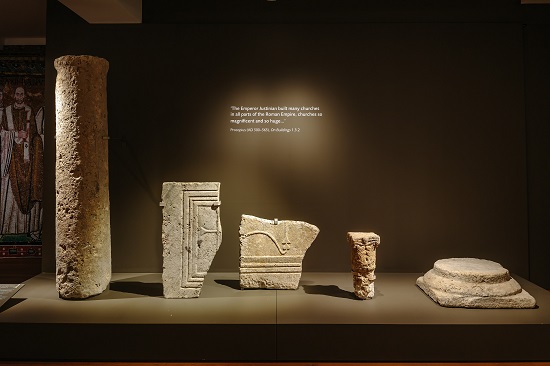 Another highlight are the remains of a Byzantine “flat-pack” church. The Emperor Justinian (ruled 527-565), in his efforts to fortify and regulate Christianity across the empire, commissioned a number of prefabricated churches. The marble church interiors were made at quarries around the Sea of Marmara (the “marble sea”), packed flat, and sent by ship to Italy and North Africa. One of these ships sank and was discovered off Marzamemi in southeastern Sicily.

Some 400 marble fragments have been recovered and some of these have been used in the exhibition to recreate what the interior of one of these prefabricated churches would have looked like. The kit included 28 columns with capitals, a choir screen and an early form of pulpit called an ambo. There is also a set of bronze church plate from a different shipwreck of the same period.

Storms, War & Shipwrecks is well worth a visit if you’re in England and runs until September 25.

Resef, Phoenician god of war and storms, who utterly failed
to protect a ship that went down off the coast of Sciacca around 100 BC

Bronze Greek helmet made in Corinth, 600–500 BC.
Found off the coast of Camarina in 1987
in the early days of underwater archaeology

Roman portrait heads, 100-300 AD, North African stone.
They might have served as the ship’s ballast. Found off Syracuse

Merchant’s scale with bust of Athena that can measure up to 100 kg.
Byzantine, 400-450 AD. Athena was still a popular figure for scale
counterweights even at this late date. Found off the coast of Selinunte