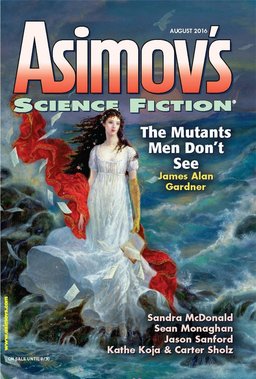 Ellie Lee fears that her son will accidentally kill himself in an attempt to activate a mutant gene that he might not even have in “The Mutants Men Don’t See” by James Alan Gardner. Gardner’s engaging urban fantasy inverts a trope or two to focus on an often invisible segment of the population, menopausal women. The title is an homage to the James Tiptree, Jr. (Alice Sheldon) novelette “The Women Men Don’t See” from the December 1973 issue of F&SF. Gardner’s story, because of its subject matter (menopause, and its being the end of the menstrual cycle), also recalls — though in a very different fashion — Connie Willis’s Hugo winning short story “Even the Queen” from the April 1992 issue of Isaac Asimov’s Science Fiction Magazine, which dealt with menstruation in a future where one young woman opted not to have the procedure that would eliminate her cycle, as most others of her age and part of a feminist movement have. “Even the Queen” and “The Mutants Men Don’t See” make interesting bookends, for both address issues surrounding a woman’s child-bearing years, the former at the beginning, the latter at the end. All three stories, though wildly different, also deal with the empowerment of women.

In Sean Monaghan’s tense August 2016 novelette, unforeseen dangers have disrupted an interstellar journey. Although the work of self-sacrificing astronauts has kept the spaceship running for hundreds of years, the voyage may soon be permanently altered by fresh “Wakers.”

In his August Reflections column, Robert Silverberg delves into ancient texts to crack “The Software of Magic”; James Patrick Kelly’s On the Net shows that he’s “Thinking about Dinosaurs”; Paul Di Filippo reviews works by Judith Merril, Allen M. Steele, China Miéville, and others; plus we’ll have an array of poetry and other features you’re sure to enjoy.

In his July Reflections column, Robert Silverberg muses on the mystery surrounding certain “Persons from Porlock”; works reviewed by Paul Di Filippo include books by Gene Wolfe, Nancy Kress, and Christopher Fowler; plus we’ll have an array of poetry and other features you’re sure to enjoy.

The August issue went on sale July 19. It will be on sale until August 30.

We last covered Asimov’s SF with the July 2016 issue.

Our August Fantasy Magazine Rack is here. See all of our recent fantasy magazine coverage here.