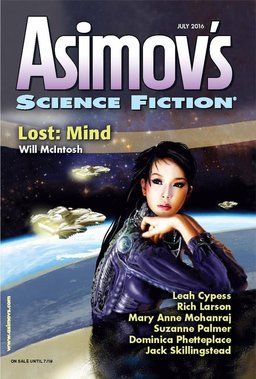 Over at Tangent Online, Chuck Rothman finds plenty to like in the latest issue of Asimov’s Science Fiction.

July’s Asimov’s begins with “Ten Poems for the Mossums, One for the Man” by Suzanne Palmer and starts out with a protagonist — a poet — attending what is essentially a writing retreat alone on an alien world with strange life forms, including the Mossums, described as “green fuzzy boulders.” The poet writes a series of poems about his impressions, and slowly begins to discover that the Mossums are more complex than he imagines. The story started a bit slowly, but quickly drew me in, and it was nice to read something that portrayed aliens by hints and without any clear-cut answers…

“Masked” shows a future where the wealthy use both makeup and holographic techniques to make themselves as beautiful as they can. Bess is about to meet again with her friend Vera, who has suffered a computer virus that wreaked havoc with the computer programs she uses to adjust her appearance. Vera is supposedly recovered, but Bess can see that she doesn’t seem right. Rich Larson’s version of the future and the styles are well imagined, and one of the strengths of the story is the way that Bess begins to understand what’s really important…

The set up to Will McIntosh’s “Lost:Mind” is convoluted, but once that’s past it becomes a fine story. Colonel Walter Murphy’s wife Mimi is dying of Alzheimer’s and, desperate, he turns to technology, creating a recording of her mind so she can live on. But such experimentation is illegal in the US, so it has to be smuggled in from India. A full mind would raise alarms, so it’s broken into 32 pieces of a chess set, to be assembled later. And the chess set is stolen. What follows is a race against the clock to find the pieces (from a noted sculptor) before the battery dies, along with Mimi’s mind. There’s a great mixture of action, dead ends, and emotional roller coasters to make the story one of the best of the year.

Hugo Award-winning author, Will McIntosh’s intriguing July 2016 novelette begins with the traditional SF concept of virtual life after death and fast veers in startling and unexpected directions. Can a “Lost: Mind” be recovered? Finding the answer will keep you on the edge of your seat until the very end.

of “The Savior Virus”; Rich Larson unveils reality to a couple of “Masked” young women; in her first appearance in Asimov’s, Mary Anne Mohanraj attempts to untangle the “Webs” created by suspicion and jealousy in time to save a young life; in his first Asimov’s appearance in more than thirty years, Robert Thurston explains why there’s “Nobody Like Josh”; Leah Cypess’s chilling and convincing depiction of the near future examines the ways we will “Filter” our news and our lives; and Suzanne Palmer’s charming and bittersweet novelette ultimately reveals why there are “Ten Poems for the Mossums, One for the Man.”

In his July Reflections column, Robert Silverberg muses on the mystery surrounding certain “Persons from Porlock”; works reviewed by Paul Di Filippo include books by Gene Wolfe, Nancy Kress, and Christopher Fowler; plus we’ll have an array of poetry and other features you’re sure to enjoy.

“Ten Poems for the Mossums, One for the Man,” Suzanne Palmer
“Project Entropy,” Dominica Phetteplace
“Nobody Like Josh,” Robert Thurston
“Lost: Mind,” Will McIntosh

The July issue went on sale June 7. It will be on sale until July 19.

We last covered Asimov’s SF with the June 2016 issue.