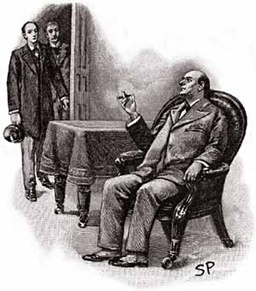 One of the things I enjoy about being a Sherlockian (no, I don’t mean a fan of the BBC television show) is the way ‘one thing leads into another’ and you can explore all kinds of avenues and lanes, wandering here and there, encountering interesting stuff. That was a long sentence!

I was fortunate enough to be included in the upcoming MX Book of New Sherlock Holmes Stories – Part V. In the early part of my story, The Case of the Ruby Necklace (yes, I know, captivating title), I had cause to include a passage from A Study in Scarlet:

“Well, I have a trade of my own. I suppose I am the only one in the world. I’m a consulting detective, if you can understand what that is. Here in London we have lots of Government detectives and lots of private ones. When these fellows are at fault, they come to me, and I manage to put them on the right scent. They lay all the evidence before me, and I am generally able, by the help of my knowledge of the history of crime, to set them straight. There is a strong family resemblance about misdeeds, and if you can have all the details of a thousand at your finger ends, it is odd if you can’t unravel the thousand and first.”

“And these other people?” I asked, regarding the many strangers that visited our rooms for private sessions with Holmes. I had wondered if he were not some kind of fortuneteller and too embarrassed to tell me so.

“They are mostly sent on by private enquiry agencies. They are all people who are in trouble about something, and want a little enlightening. I listen to their story, they listen to my comments, and then I pocket my fee.”

“But do you mean to say,” I said, “that without leaving your room you can unravel some knot which other men can make nothing of, although they have seen every detail for themselves?”

“Quite so. I have a kind of intuition that way. Now and again a case turns up which is a little more complex. Then I have to bustle about and see things with my own eyes. You see I have a lot of special knowledge, which I apply to the problem, and which facilitates matters wonderfully. Observation with me is second nature.”

Of course, we know that Holmes didn’t spend sixty cases sitting around 221B, solving clients’ cases. Thankfully! He hopped up, headed out to Lauristen Gardens and went hither and yon, bringing the guilty to punishment: and occasionally letting the guilty go free.

After I submitted my story (just a few days after the deadline: we’re not talking ‘Douglas Adams late’ here), the little gray cells began working (mixing my detectives here) and I thought about brother Mycroft. I remembered an essay in a favorite book, Sherlock Holmes by Gas-Lamp, which posited that Mycroft was a computer. That was Lyttleton Fox’s “Mycroft Recomputed.”

It’s Elementary – I think I’ve mentioned before that Sherlock Holmes by Gas-Lamp, edited by Philip Shreffler, is a cornerstone book for any would-be Sherlockian. It contains almost seventy essays from the first four decades of The Baker Street Journal. Note every article is a winner, but there’s some great reading in this. Albert and Myrna Silverstein’s “Concerning the Extraordinary Events at the Reichenbach Falls” is one of my all time favorite writings on Holmes.

Now, I didn’t think Mycroft was a computer, but that got me doing a little Mycroft digging into my Baker Street Journal CD and I read Donald A. Redmond’s “The Armchair Still Misplaced” and W.D. Jenkins’ “The Adventure of the Misplaced Armchair.”

“The Bruce-Partington Plans” is one of my favorite stories in the Canon. One (but not the only) reason is that we learn more about Mycroft’s job. As Holmes tells us:

“Well, his position is unique. He has made it for himself. There has never been anything like it before, nor will be again. He has the tidiest and most orderly brain, with the greatest capacity for storing facts, of any man living. The same great powers which I have turned to the detection of crime he has used for this particular business.

The conclusions of every department are passed to him, and he is the central exchange, the clearinghouse, which makes out the balance. All other men are specialists, but his specialism is omniscience. We will suppose that a minister needs information as to a point which involves the Navy, India, Canada and the bimetallic question; he could get his separate advices from various departments upon each, but only Mycroft can focus them all, and say offhand how each factor would affect the other.

They began by using him as a short-cut, a convenience; now he has made himself an essential. In that great brain of his everything is pigeon-holed and can be handed out in an instant. Again and again his word has decided the national policy. He lives in it.”

It was J.S. Callaway’s “Mycroft and Her Majesty’s Invisible Government” (also in Sherlock Holmes by Gas-Lamp) that took me back to the passage from A Study in Scarlet. And when I couple that with “The Bruce-Partington Plans excerpt, I think we’ve got parallel professions for the Brothers Holmes.

Mycroft has built an unmatched knowledge base, just like his brother. Other government officials come to him for both information and analysis: And almost certainly, advice. He goes into his knowledge bank (NOT his “mind palace”) and offers a solution. This is just what Sherlock tells Watson he does for his clients.

The Brothers Holmes created their own similar niches, based on extraordinary specialized knowledge and utilizing their observational and analytical abilities, to become masters in their fields.

It’s Elementary – Movies and books have made Mycfroft a much more prevalent character than he was in Conan Doyle’s original tales. He has a prominent part in “The Greek Interpreter” and “The Bruce Partington Plans,” appears in disguise in “The Final Problem” and is mentioned in “The Empty House.” But he’s been moved center stage in films (i.e., The Private Life of Sherlock Holmes), television (BBC Sherlock and Granada’s Jeremy Brett series) and books (such as Hodel & Wright’s Enter the Lion and Quinn Fawcett’s Mycroft series).

See, I always had a problem with how Mycroft was presented in the two stories with which I principally associate him – ‘The Greek Interpreter’ and ‘The Bruce-Partington Plans’. I think his function in each story is quite different, and as a result character presentation is quite different, so much so that they seem like two different men.

The Mycroft of ‘The Greek Interpreter’ is Yin to Holmes’ Yang. Whereas Holmes is lean, hyperactive and committed to his craft, this Mycroft is fat and indolent and possessed of a talent far greater than Holmes’ – he identifies the culprit in a case which Holmes investigated, based purely on what he has read in the papers. He lacks Holmes’ discipline but then, he doesn’t really need it. This Mycroft doesn’t even need to go to the crime scene. The guy is so awesome he can figure it all out while never moving from his armchair, and his government job (such as it is) is the sort of job easily accomplished by somebody who is as lazy as he is smart.

Compare this with the Mycroft of ‘The Bruce Partington Plans’ – a harassed, high-ranking government official relying on his brother’s investigative abilities to resolve a case of industrial espionage. This Mycroft is a more conventional version of what Sherlock might have become, had he chosen to work in the Public Sector. This Mycroft bustles about anxiously (his weight-problems seem a thing of the past). The only thing he has in common with the Mycroft of ‘The Greek Interpreter’ is that they both share the same name.

I always enjoy the introductory scene in “The Greek Interpreter” where Sherlock and Mycroft perform their verbal dissection of passersby in the street below the Diogenes Club windows. And, despite his superior powers of observation and deduction, Mycroft comes across as rather courteous, particularly in his warm greeting to Dr. Watson (“I hear of Sherlock everywhere since you became his chronicler”).

As for being a Sherlockian, I recall William Baring-Gould in the original edition of The Annotated Sherlock Holmes explaining that American Sherlockians were called Holmesians, whilst British Holmesians were labeled Sherlockians.

Eugene – I think it was the other way around: Sherlockians are American and Holmesians are British. Though I’ve rarely heard the latter term used for anybody.

@Aonghus Fallon
I’ve always thought that contradiction problematic myself. One of the reasons I found Mycroft’s sudden decision to over eat in the Sherlock episode “Abominable Bride” so funny. Nice bit of hardcore fan service, that.

I never really noticed the distinction. In Greek, Mycroft isn’t really invested. A neighbor has an unusual problem, so he turns it over to his brother.

In Bruce Partington, big international doings are at stake. Along with all the other things Mycroft has to take care of (including the Siam problem, I believe he said it was).

So he tells Sherlock to do all the running around and fix things.

Daran – yeah, that was a nice touch! Although I haven’t watched the entire series, I was struck by how the producers made some attempt to reconcile the two very disparate ways in which the character was presented.

Bob – just thinking out loud. There’s a seven year gap (I think) between the ‘Greek Interpreter’ and ‘The Bruce Partington Plans’. I don’t think Doyle had any real plans for Mycroft in the interim – in his first incarnation, he’s a sort of jokey comment on what makes Holmes tick. My guess is that Doyle reckoned on his readers (‘Strand’ subscribers, anyway) having only the vaguest recollection of how Mycroft was presented in the first story before re-introducing him in ‘The Bruce-Partington’ plans.