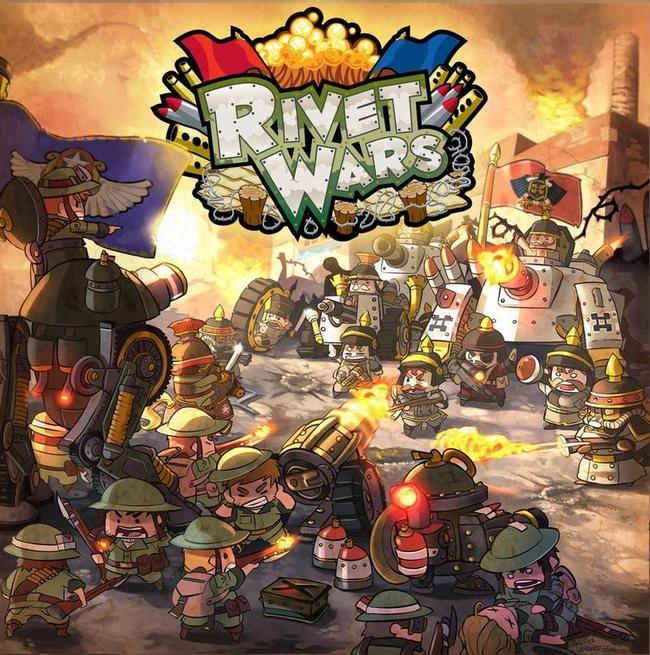 Last month I bought a copy of Rivet Wars, one of the most popular light war games on the market. It was designed by veteran computer game designer Ted Terranova (Rise of Nations), who worked hard to give the game the feel of a computer RTS (real time strategy) game…. and, going by the reviews, he largely succeeded. Here’s the description.

Rivet Wars is a miniatures boardgame that springs forth from the warped imagination of Ted Terranova – set on a world that never quite left World War I but with crazy technology like walking tanks, diesel powered armor, unicycled vehicles and armor plated cavalry! Don’t let the cute visuals fool you; it’s a world full of angst, war-torn camaraderie and dark humor. Rivet Wars is at its heart a strategy game, with both players deploying units each round to counter the threats set forth by their opponent and stay one tactical step ahead. Heavily influenced by Ted’s experience working on RTS games like Rise of Nations, players gather resources (bunkers and capture points) and use these to deploy streams of new units! There’s an ebb and flow on the tactical landscape and you can stock up surprises for your opponent to be unleashed even as he thinks he’s winning!

And here’s a peek at the back of the box. 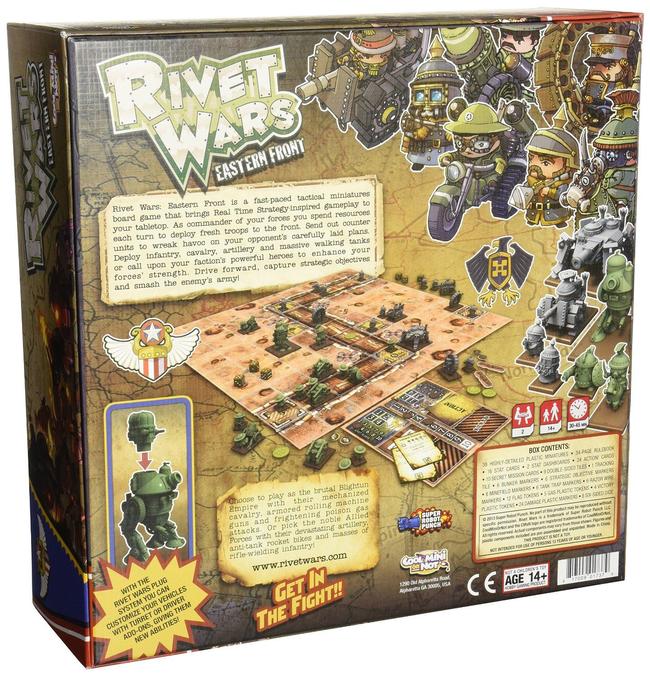 There isn’t a lot of depth to Rivet Wars — initiative is crucially important, there no way to hide on the map, and half the joy of the game is in the detailed plastic miniatures. But it has been embraced with open arms by board gaming fans, and they’re a tough lot to impress. A typical game takes around 30 minutes, which makes Rivet Wars one of the fastest playing games on the market. 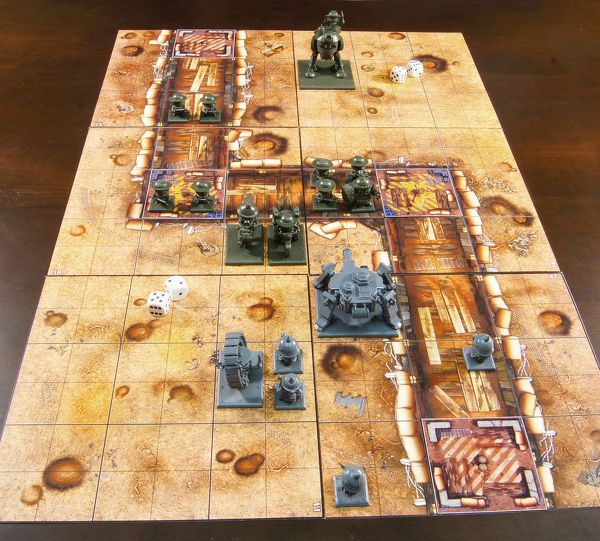 Rivet Wars was originally funded by a very successful Kickstarter in February 2013. It raised $582,316 on a $25,000 goal with 2,464 backers, which made it one of the most successful board games in Kickstarter history, unlocking an absurd number of stretch goals in the process. The retail version has been available since 2013.

The retail version is fairly expensive. It retails for around $75, but the box comes ridiculously packed, including all this: 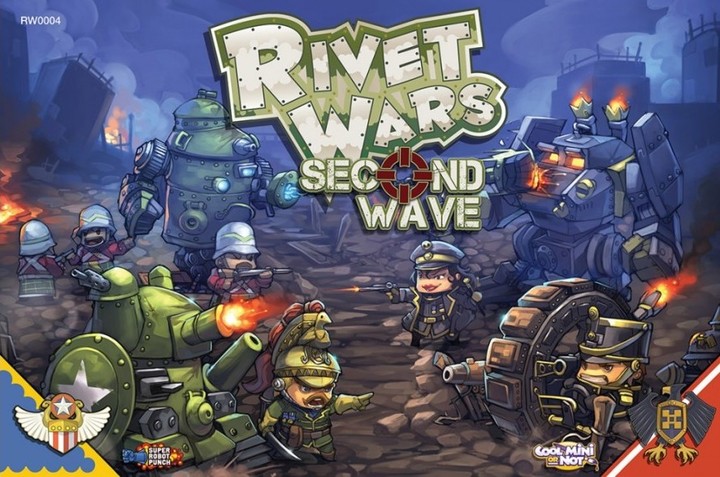 There are also several minor expansions, including additional scenarios and miniatures. See the always-growing list at BoardGameGeek. 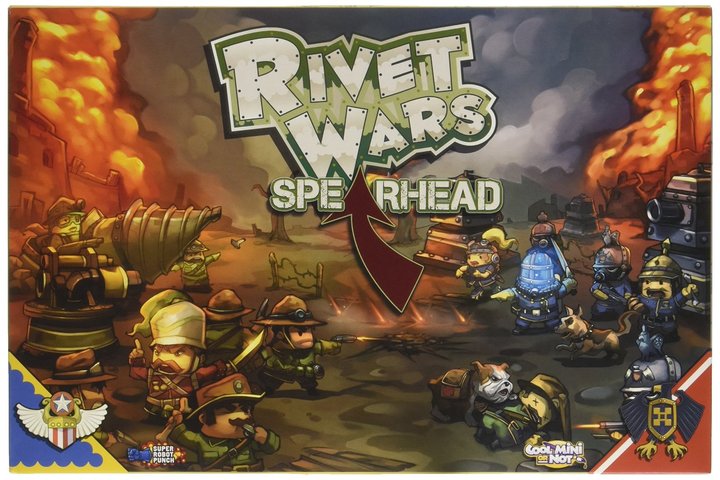 With the plethora of expansion packs available (all going by the title Rivet Wars), the original game has now been re-titled Rivet Wars: Eastern Front. That’s the one you should buy first.

I haven’t purchased any of the expansion packs yet, although I’m sorely tempted. Step one, of course, is tearing open the shrinkwrap on my copy of the original box… a process that takes weeks of mental preparation. I’m getting closer. 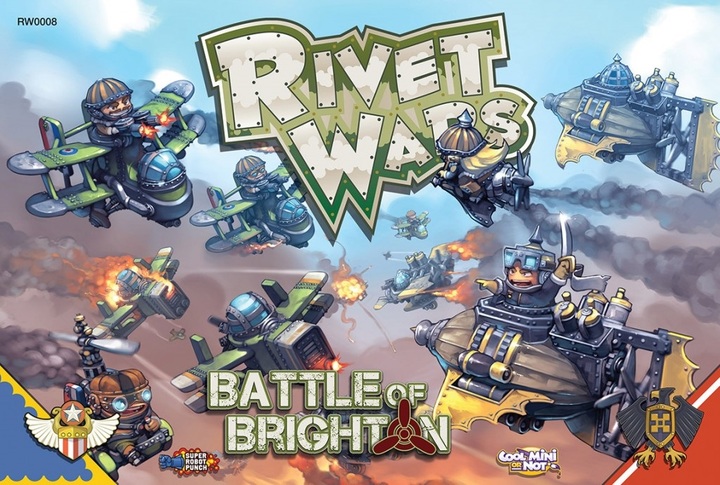 Rivet Wars: Eastern Front was designed by Bill Podurgiel and Ted Terranova, and published by Cool Mini Or Not/Edge Entertainment in 2013. It is distributed by Asmodee, and is priced around $75. I bought my copy online for $58.

See all of our recent fantasy games coverage here.

I’ve see this game pop up a lot on board game geek but I never realized it was supposed to be an RTS boardgame. It is all in real time or is more just simultaneous planning and you both reveal your move at the same time?