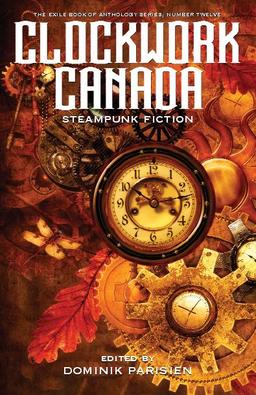 I’ve been enjoying Amal El-Mohtar’s review column at Lightspeed magazine. In her latest, for the May issue, she calls Max Gladstone’s Four Roads Cross, the upcoming book in his Craft Sequence, “breathtakingly satisfying,” and Nnedi Okorafor’s Nebula-award winning Tor.com novella Binti “a startling whirlwind of a book that engaged and entranced me.”

But it’s her review of Dominik Parisien’s new anthology Clockwork Canada that I found most intriguing. Party because I’m Canadian, but also because the book sounds so darn enticing. Here’s Amal.

In Clockwork Canada, [Dominik]’s brought an artificer’s eye to this collection’s various parts to ensure they work together as a whole that is more than their sum… It’s an enormously diverse collection, both in terms of its authors’ backgrounds and interests and the eclecticism of its contents: These are stories that span the breadth (and occasionally, literally, depth) of Canada, geographically and temporally, as well as the whole spectrum of steampunk. There’s a good mix of adventure stories and domestic stories, some more hopeful, some more horror; some are more fantastic, some more science fictional. Some stories imagine alternate histories, while others nestle small, beautiful stories in the corners of enormous events; some do both, and more, tangling retro and futurism in different measures.

This is not a collection of beaver jokes and maple syrup. I hugely appreciated seeing, across all these stories, a Canada shorn of any of the jingoistic patter that masquerades as heart-warming pluralism these days. These stories probe and poke at the country’s beginnings as at the edges of a wound: the workers who fed their bodies like coal into the railroad’s furnace; the immigrants who were turned away at ports for being too brown, too foreign; the enslavement of African peoples; the indigenous people displaced and decimated. “So you think you know about Canada,” any of these stories might begin. “Let me tell you about Canada…”

An excellent showcase for new and established Canadian voices as well as for Parisien’s editorial skill, Clockwork Canada’s a fascinating, faceted read that I thoroughly enjoyed.

Read Amal’s complete review here. We previously covered Clockwork Canada — including listing the complete TOC — here. Clockwork Canada was published by Exile Editions on May 1, 2016. It is 304 pages, priced at $19.95 in trade paperback and $7.99 for the digital version.