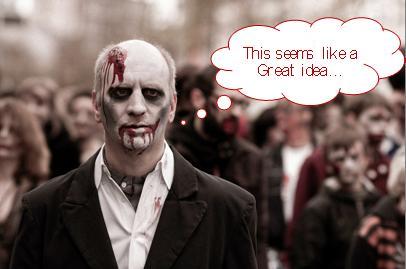 You don’t need to have spent thousands of hours sitting in front of horror movies to know this is an extremely bad idea.

US biotech company Bioquark and its ReAnima project has been granted authorization and ethical permission to use 20 brain-dead patients for what is sure to be a highly controversial study: Starting next year, they plan to stimulate their nervous systems in order to restart the brains. Bioquark is hoping that its part in the groundbreaking ReAnima project will reveal if people can at least partly be brought back from the dead.

The idea here is that several different techniques, such as, “…injecting the brain with stem cells, giving the spinal cord infusions of beneficial chemicals, and nerve stimulation techniques” will all be tested to see if reanimation is possible.

Our definitions of death may have to change in the very near future, as well as our understanding of consciousness and the stability of memory persistence.

So let’s ponder this for a moment.

The 20 patients have been certified brain-dead and are only avoiding decomposition because they are hooked up to a variety of machines that keep their bodies going, even if their brain isn’t functioning. After treatments by ReAnima have been administered, these patients will be observed for several months to see if any neurological changes or activity is present. Specifically, the site writes that they will be focusing on the upper spinal cord, which is where the breathing and heart beat functions are controlled.

Bioquark CEO Ira Pastor explains, “It is a long-term vision of ours that a full recovery in such patients is a possibility, although that is not the focus of this first study. But it is a bridge to that eventuality.”

This one goes firmly in the “WTF” column.  Fred Gwynne from Pet Sematary was right when he said, “Sometimes, dead is better.“

Goth Chick News will be on hiatus for the next three weeks while we lay in provisions for the coming apocalypse.  But please feel free to post a comment for posterity or drop a note to sue@blackgate.com.  I plan to have wifi in the bunker.

Did you may have catch the recent article on the dashing Italian neurosurgeon who — seriously — announced he would like to assemble a worldwide elite team to perform the world’s first human full cranial transplant?

Check out Ray Kurzweil’s seminal work “The Singularity is Near”…in 20-30 years, “saving” the human brain will likely be passe…we probably won’t need them 😉

Thanks for bringing this to our attention Sue.

Awa, thanks so much for the additional nightmares. I haven’t trusted Italians since my trip there where I was tricked into eating raw squid.

James, you’re welcome to take refuge in the underground offices of GCN, but you will need to successfully navigate the “End of the World” party currently rages on the main floor.

I cant get over her name – She is really called Pastor? (as in minister, vicar?)
If this was a novel I would salute to the author for this clever name 🙂