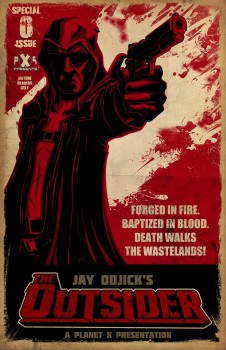 a Canadian graphic novelist who in 2014 became the Executive Producer and lead writer for the animated TV series Kagagi: The Raven, which was an adaptation of his own indie graphic novel. His TV show about a teen native American superhero is running on APTN in Canada and FNX in the USA and other foreign markets have shown considerable interest.

In the fall of 2016, Jay will have a new graphic novel coming out called The Outsider, and the 12-page The Outsider #0 is available for free download right now here. I caught up with Jay this week to talk about his return to comics.

Thanks for the chance to talk Jay! What’s the concept pitch for The Outsider?

It’s just your average run of the mill post-apocalyptic, ultraviolent, exploitation/grindhouse, Western with a dash of fantasy, gonzo Saturday morning cartoon on acid. Y’know, one of those old yarns! 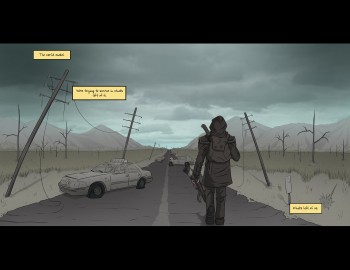 You’ve just spent 2-3 years working as an executive and creative in YA animation. The Outsider is decidedly not YA. What drove this change in tone?

I wrote and drew the Kagagi: The Raven OGN, which was aimed at YA, then moved into the animated series Kagagi pretty soon thereafter. In the meantime, I’ve drawn a few kids books and I did a story for MOONSHOT: The Indigenous Comics Collection, which was YA – and won the School Library Journal Book Of The Year award in that category, so I guess it was pretty good YA 😉

It’s something I dig, obviously but it’s not the ONLY thing I dig. I like all kinds of stuff. I like horror. I like old grindhouse movies. People who know me know I love 80’s action movies. I figured it was time to try something in a genre I’d never worked in before, something that I’ve always wanted to do.

One of my heroes is filmmaker Takashi Miike – take a look at his credits sometime. One film’s a Yakuza crime thriller, the next a hardcore horror film, then maybe a children’s movie. That’s cool. Maybe I can’t pull off that wide a range in genres and story types but I’d like to visit some of the other genres I really dig. It’s freeing. I like freedom.

You mentioned that you were aiming for grungy, raw adult animated series as an art style. You’ve been an artist for a long time and you have a number of styles at your disposal. What do your think that artistic choice brings to the table thematically? Were there models you were attracted to in other works, whether comics or TV? 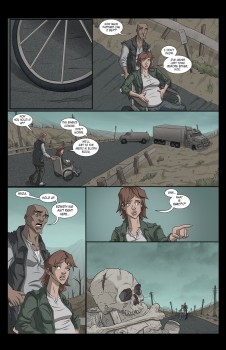 Don’t get me wrong; this makes sense, but typically when we see a real raw, violent, edgy post-apocalyptic type comic or graphic novel, it tends to be drawn in a rough/indie or more realistic style. That’s awesome. But everyone’s doing it. Once everyone starts doing it, it maybe has the potential to lose it’s cool.

Awhile back, for sh*ts and gigs, I drew up a Machete piece – Danny Trejo as the character from the Rodriguez movie of the same name. Danny re-posted it on Facebook and it got something like 50,000 Likes and 2500 shares.

It was drawn in the same kind of cartoony style as The Outsider, more or less – and many of the comments were similar, in that many people expressed a desire to see a machete cartoon. I agree. That would be awesome.

We will probably never see it, but it did get me thinking – which, yes, does happen at times – something with a similar aesthetic in general might be cool. Maybe not AS cool, but whatevs, as the kids say.

Anyway, I decided it would be fun – and really, that’s also kind of what this is about for me. Not having to worry about what a network, business partners, distributors, advertisers think or want to see. Just get back to doing something fun. If people read it and go, “Hey, this fun!” – cool. If so, y’know, help a brother out and pass on the word – but I basically just wanted to do a comic I would read.

Also, I don’t know about anyone else, but to me, when we see massive head wounds and blood splatters and whatnot, it tends to stand out more when it’s happening in a kind of cartoony aesthetic. I tried to really raise the bar in comics for blood splatter FX here! It’s all about legacy, clearly.

All kidding aside – The Outsider is mine, 100%. I write it. I drew it. I inked it. I colored it. I lettered it. I have complete control over what it is and how it looks and I can make sure it looks the way I want it to and that’s pretty unique in comics as far as I can say, from my experiences to date. Trying to make the most of it!

So you’re releasing The Outsider #0, a 12-page issue, as a free digital comic. You could have sold it. In this, you’re following in the footsteps of Cory Doctorow, Hugo-Award winning author and founder of Boing Boing, who also releases all his works online for free. What are you trying to get out of such a counter-intuitive business model?

Trailers. I friggin’ love movie trailers and awhile back, one of my Planet X cohorts (Planet X is a podcast. It’s probably your cooler kid sister’s favorite podcast; check it out here), Ken Bonnie and I had an idea for a 70’s biker grindhouse comic and were thinking about dropping a six or seven page “trailer” to debut it.

The 1-page issue #0 is The Outsider’s trailer; but instead of being scenes chosen to represent the graphic novel – coming later this year – I decided to do a short, fun little snapshot of a story that would let people see if this is something they’d be interested in or not.

Business-wise… there’s a long and complex answer here and the short, friendly version is, while TV took a lot out of me in many ways, it also gave me the freedom to be able to sit down and work on stuff like this without needing to worry about how I could sell it.

The graphic novel itself won’t be free. Maybe DC/Marvel have the ability to ask for people to buy stuff sight unseen, but if I want to get the actual graphic novel to people, I think the best way to go about that is to give em a taste. If you want more, we’ll have more. If not, hey cool – thanks for checking it out.

I also believe if you have people that support you, they’ll support you no matter what. I’m going to do a small print run of the 0 issue to bring to shows and cons and whatnot, and I firmly believe that even if people have read the free digital version, they’ll pick up a print copy if they really like my work.

Post-apocalyptic has been big in comics, cinematically and on TV for some, although sometimes the offerings are thematically tame. One of the things I noticed right away in The Outsider was that race was foregrounded. You’ve got an interracial couple, a racist white highwayman, and a low-status native American gunslinger. Even your editorial suggests that race has a big piece of the thematic pie. What would you like to do thematically with these elements? Are your artistic and thematic goals about race different from what you were trying to do with the same themes in Kagagi?

Kagagi was basically (to me anyway) about flipping a trope on its head and maybe curb-stomping it a little – the idea of the kind of mystic, Native boogeyman. We’ve all seen it – we’re watching a movie, or tv show or reading a book and a Native element is introduced and it’s of course mystical and to be feared. Well, in Kagagi there’s a native element and yes it’s mystical but it isn’t to be feared; it’s the GOOD guy; and girl, if you’ve seen the show and remember Claw…

But I digress. There were other race themes explored in Kagagi (Matthew is a Native kid growing up in a city who doesn’t have access to much about his culture and background, is the only Native kid at school etc) and while there was some metaphor and subtext present, I think The Outsider has a lot more.

In issue #0, there are some things present in it – which you touched on and I’ll get back to – but the graphic novel itself deals with these a bit more in depth maybe. The Outsider, the character is a native or First Nations character – my question posed at the end of the 0 issue is: did you know that reading it? Did it even matter? I’ve always been told that books with a Native main character won’t sell.

Untrue. Books with a STEREOTYPE Native main character don’t sell. Big difference. The Outsider graphic novel touches on the idea that even though First Nations peoples are intrinsically tied to this place of Canada and of this place of Canada, we are still, in many ways outsiders within Canadian society.

The graphic novel itself is kind of a look into my thoughts on that – but also in my opinion, works on the level of just a cool, fun story. As for the 0 issue and what you mentioned above – I don’t want to say “this is what it means” because even if it’s crazy, gonzo sh*t, it’s still art and art’s open to interpretation, but yeah, there seems to be something going on there.

All I’ll say is the future’s coming on strong. There are still those who want to oppose or block it and those roadblocks are something we need to get past. Can be hard on our own… There’s more to this than guts and gore. My take is – if you don’t really have anything to say, get off the stage, y’know?

I was really impressed with The Outsiders, Jay and am really looking forward to the graphic novel in the fall.

Thanks! I don’t have a release date yet – trying to get it done as quickly as possible, but again, I’m handling every aspect of the production myself, so it’s time intensive and at the same time, I still have all the other work duties on the table. It doesn’t always leave a lot of time to draw head’s exploding, but I try.

And please check out The Outsider #0 issue at planetxpodcast.blogspot.ca or a PDF here. If you dig it, follow me @jayodjick and at Facebook for news and updates on the graphic novel. It’s a huge undertaking but coming along well – and will have some other fun stuff, like prose passages, photos and some other short stories about the end of the world by some of my ultra talented friends and peers. I promise it’s going to be a fun, unique ride!

Derek Künsken writes science fiction, fantasy and horror in Gatineau, Québec. His latest science fiction story is in the April/May issue of Asimov’s Science Fiction, on stands until the end of May. He tweets from @derekkunsken.