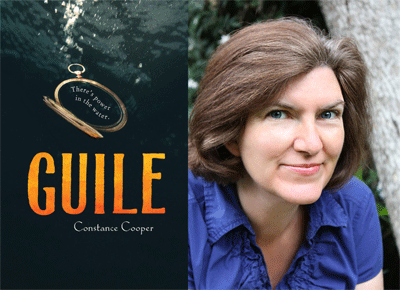 Guile begins with the girl, but here we must begin with the town.

First, posit a dream-logic variation on Louisiana, a region of lovely old towns sinking inexorably into swamp, linked along their river by villages of stilted cabins. People here live by their river, inevitably — subsistence fishing is the most common livelihood — but the river can’t be trusted. Not just because it floods, but because of the mysteries it carries from dangerous lands upstream.

Because this is a dream-logic Louisiana, the pollution the river carries is not a thousand miles of industrial effluent, but the residual magic of a civilization that collapsed long ago. It’s a pervasive, contaminating magic, full of advantages for those who understand it — but it also breaks down the dividing lines between humans, beasts, and objects. People cope poorly when such boundaries get blurred, so even though the effort to police them is futile, policing them nonetheless is one of the principal priorities of this world’s customs. The heroine’s high town relatives are what you might get if H.P. Lovecraft and his prissy Providence aunts had made their respectable home just a mile from a slumful of Deep Ones.

The river might make a tool so intent on the task it was cast for that anyone who touches it can do nothing else. It might warp the bodies of divers who gather old artifacts to sell, webbing their fingers and gilling their throats. Animals who narrowly avoid drowning in the river emerge in a new kind of danger, endowed with human intelligence and speech, to the sometimes violent horror of actual humans. And minds contaminated by the magic can detect the magic, come to recognize its forms and functions, and use it where they find it, while those who’ve kept clean remain magic-blind.

In the town of Wicked Ford, an orphan girl with a secret claim on high town respectability but a history in a bayou stilt village lives under an assumed name and a false claim. Yonie makes her living as a pearly, an assessor of magical objects. For her part, she’s a self-taught antiquarian with a brilliant eye for detail, but to detect and diagnose magic, she needs the help of her business partner the talking cat.

What makes Yonie such an appealing heroine is her sense of compensatory honor. Although she lies to her clients about how she knows the secret natures of the objects they bring her, she and her cat LaRue make sure every client gets more and better help than anyone else would give. It’s that very determination to balance each harmless wrong with a hard-won right that gets Yonie into the trouble that launches the story.

Driven by an enchanted object that makes people long for home, Yonie sets out to find her late mother’s estranged parents. Mysteries surround the break between the high town grandparents and their prodigal daughter, and even more dangerous ones surround the break between Yonie and her father’s bayou kinfolk, who dispatched her back to the city rather than take her in.

A few times, I needed to remind myself how young this protagonist is. Does our sixteen-year-old, whose only parent-like influence for the past several years is a cat, make a couple of boneheaded mistakes? Oh, yes, but what sixteen-year-old hasn’t? And as the ending drew in sight, I found that I expected and wanted to see more closure to the plot strands involving Yonie’s suitors. Yet for a girl so young and with so much resourceful will to adventure to settle down so soon with anyone would be out of character and out of place in the book we have. The suitors are full enough of surprises, I hope they make some appearance in Cooper’s sequel.

Guile is a remarkable layerwork of mysteries. From the seemingly trivial and isolated mysteries about enchanted lockets and street signs that Yonie and LaRue solve for their daily subsistence, a larger pattern emerges that demands investigation. Mysteries of personal origin run beneath them, and every relationship Yonie has with kin, allies, friends, and suitors will be changed one way or another by the end of the book. Deepest of all runs the mystery of the river’s magic and the fallen civilizations that once understood it.

Constance Cooper’s debut novel delighted me from start to finish. The worldbuilding feels thoroughly lived in, as if we could step ahead of Yonie around any corner or shrub and something amazing would already be there for us to find. The characters are richly imagined individuals, and together they add up to a social world that is both kinder and more dangerous than Yonie ever guessed. The plot runs like the river delta it’s set in, its streams parting and rejoining and braiding around obstacles until it runs clear to its conclusion. Guile could certainly stand alone. I’m very glad it won’t have to. When the sequel arrives, I hope it’s the next of many.

Sarah Avery won the 2015 Mythopoeic Fantasy Award for her novella collection, Tales from Rugosa Coven. The Trafficking in Magic, Magicking in Traffic anthology she coedited with David Sklar includes stories by James Enge, Elizabeth Bear, and Darrell Schweitzer. Her own short stories have appeared Jim Baen’s Universe, Fantasy Scroll Magazine, and the last print issue of Black Gate. Sarah’s an escaped academic who survived earning a Ph.D. in English literature, and an ambivalently entrepreneurial private tutor. Her Kickstarter project, The Imlen Bastard, will be available this summer. You can keep up with her at her website, sarahavery.com and follow her on Twitter.

This sounds terrific. But isn’t ‘dream-logic Louisiana” a tautology?