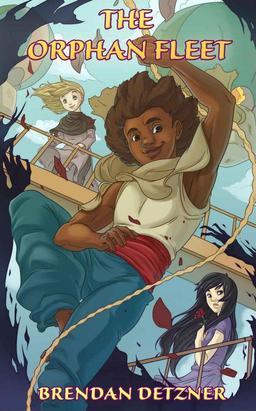 I’ve been following Brendan Detzner’s work with keen interest for the past few years. He’s published a number of tight, razor-sharp horror stories in places like Podcastle, ChiZine, Pseudopod, One Buck Horror, and other fine venues.

When I heard he was turning his hand to adventure fantasy, I jumped at the chance to be an early reader, and I’m glad I did. Here’s my enthusiastic blurb, which ended up on the finished novella, The Orphan Fleet.

The Orphan Fleet is terrific adventure fantasy — a non-stop tale of action and strange magic on a wind-swept mountain top where abandoned children have forged a free community, servicing far-traveling airships on sturdy wooden platforms. Here masked heroes with names like Golden Sam and The Sparrow are the ultimate celebrities — and the mysterious Count leaves shivers of terror wherever he treads. When that community is threatened by an admiral who demands the return of his prized daughter, it triggers a terrible war fought in the air, on the ground, and in the old abandoned scaffolding circling the mountain … a war where Golden Sam may prove himself a true hero after all, and the Count has a terrible role to play.