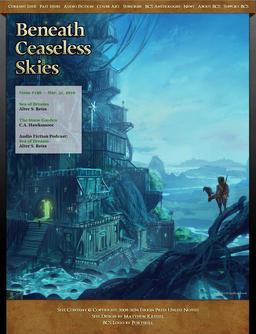 Issue #196 of Beneath Ceaseless Skies introduces new artwork by Geoffrey Icard, and features original short fiction by Alter S. Reiss and C.A. Hawksmoor, a podcast by Alter S. Reiss, and a reprint by Oliver Buckram.

“Sea of Dreams” by Alter S. Reiss
There was nothing Ierois could say; he made his way back to his house and took up the book he had been given. But there was something stale in the words. Over his years on the island, he had been given nine other books, but they had become outworn, nothing in them to distract him.

“The Stone Garden” by C.A. Hawksmoor
They rose with the light and worked long into the sunrise clearing a space beneath the broken roof, like the hollow an animal makes in the bracken by circling itself to sleep. Unloading the wood-burner from the wagon and coaxing it into place against the chimney breast was harder, and the tear in Gwyn’s shoulder tugged like wool caught in a wall.

“Sea of Dreams” by Alter S. Reiss
Over his years on the island, he had been given nine other books, but they had become outworn, nothing in them to distract him.

“The Black Waters of Lethe” by Oliver Buckram (from Beneath Ceaseless Skies #150, June 26, 2014)
I scan the opposite shore of the wide river for any sign of human activity, for the people who sent the boat.

This month’s cover, “Forest,” is by Geoffrey Icard. We last covered Beneath Ceaseless Skies with issue #195.