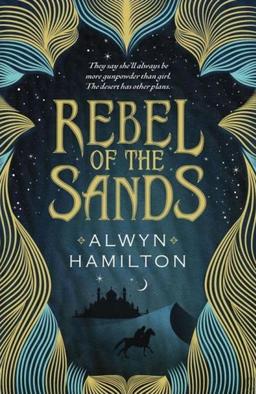 If you’ve noticed me covering a lot of Young Adult new releases recently, you’re not wrong. It’s a full time job keeping up with all the intriguing YA fiction flooding the market, and I’ve had to become a lot more selective than I used to be.

Alwyn Hamilton’s Rebel of the Sands cries out for some attention, however. It features a desert kingdom, mythical beasts, djinn, and an orphaned girl who becomes a gunslinger. Bestselling author Alison Goodman calls it “a wild ride… a stunning debut full of irresistible energy, heart-stopping action, and a new voice that sings.” It’s available in hardcover from Viking.

Mortals rule the desert nation of Miraji, but mythical beasts still roam the wild and remote areas, and rumor has it that somewhere, djinn still perform their magic. For humans, it’s an unforgiving place, especially if you’re poor, orphaned, or female.

Amani Al’Hiza is all three. She’s a gifted gunslinger with perfect aim, but she can’t shoot her way out of Dustwalk, the back-country town where she’s destined to wind up wed or dead.

Then she meets Jin, a rakish foreigner, in a shooting contest, and sees him as the perfect escape route. But though she’s spent years dreaming of leaving Dustwalk, she never imagined she’d gallop away on mythical horse — or that it would take a foreign fugitive to show her the heart of the desert she thought she knew.

Rebel of the Sands reveals what happens when a dream deferred explodes — in the fires of rebellion, of romantic passion, and the all-consuming inferno of a girl finally, at long last, embracing her power.