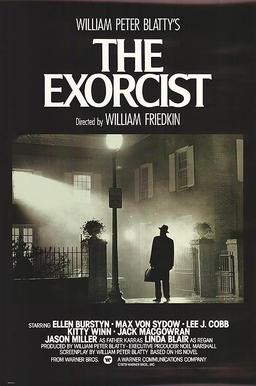 William Friedkin’s 1973 film The Exorcist was a landmark in horror cinema, a cultural phenomenon, and (if adjusting for inflation) the ninth highest-grossing film of all time. I remember hearing stories about it from relatives who described the mixture of fascination and revulsion with which the movie-going public met The Exorcist at the time.

I also remember skulking around the library in search of William Blatty’s novel, just to try and figure out what was so awesome about the story, but as I also kept getting caught it wasn’t until many years later that I both read and watched The Exorcist.

As you may or may not recall, the film makes minimal use of music — a stylistic choice which ran contrary to the norm of the 70’s when nearly every film regardless of genre, gave birth to a soundtrack album.

Of the little music used in the film, most famous is Mike Oldfield’s “Tubular Bells,” which went on to become a smash so huge that it essentially birthed the Virgin empire.

Before Friedkin settled on Oldfield’s masterpiece, he had originally commissioned a score from Lalo Schifrin, who had famously done soundtrack work for Cool Hand Luke, Dirty Harry, and the instantly recognizable Mission Impossible TV show theme.

This score was used in an advanced trailer which has often been referred to as the “banned trailer.” As the stories go, this trailer literally made audiences sick when it was shown.

Check it out for yourself below.

If you’re like me, it’s probably now unclear if the sounds and images were really that upsetting to early 1970’s audiences, or if it was that disorienting black and white, burn out effect which even now on my computer, is making me feel a little like hurling. Urban legend speaks of viewer having seizures after seeing the trailer (thus how it earned the moniker of “banned”), which is sort of understandable with all that flashing – but it made great PR at the time. 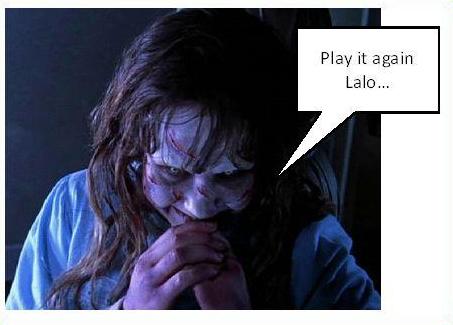 Schifrin, speaking to Score Magazine revealed some of the history of his work and Friedkin’s reaction:

The truth is that it was one of the most unpleasant experiences of my life, but I have recently read that in order to triumph in your life, you may previously have some fails.

What happened is that the director, William Friedkin, hired me to write the music for the (Exorcist) trailer, six minutes were recorded for the Warner’s edition of the trailer. The people who saw the trailer reacted against the film, because the scenes were heavy and frightening, so most of them went to the toilet to vomit. The trailer was terrific, but the mix of those frightening scenes and my music, which was also a very difficult and heavy score, scared the audiences away.

So, the Warner Brothers executives sent Friedkin to tell me that I must write less dramatic and softer score. I could easily and perfectly do what they wanted because it was way too simple in relevance to what I have previously written, but Friedkin didn’t tell me what they said. I´m sure he did it deliberately. In the past we had an incident, caused by other reasons, and I think he wanted vengeance. This is my theory. This is the first time I speak of this matter, my attorney recommended me not to talk about it, but I think this is a good time to reveal the truth.

Finally, I wrote the music for the film in the same vein as that of the trailer. In fact, when I wrote the trailer I was in the studio with Friedkin and he congratulated me for it. So, I thought I was in the right way… but the truth was very different.

According to Neil Lerner’s Music in the Horror Film: Listening to Fear, Friedkin had asked Schifrin for a score that “did not sound like music” and which was “tonal and moody.”

Reportedly, Friedkin was so displeased with the partial score that Schifrin had submitted that he literally threw it out of the studio window—mirroring the second story window ejections of Burke Dennings and Father Karras in the film. So it’s no wonder Schifrin called it one of the “most unpleasant experiences” of his life.

If you dare give it a listen, here is the full rejected Schifrin score for The Exorcist:

I mean, as music goes, it is rather terrifying – specifically the chanting nun or whatever the heck that was.

What is really intriguing to me about all of this is the level of desensitizing we, as humans, have apparently all gone through in the last forty-or-so years. I mean, The Exorcist is still a horror classic on a lot of levels, but I don’t think even one of the Saw or Hostel movies sent audience members running to the lobby to blow chunks, forget their trailers alone. And while Schifrin’s score is decidedly mood-setting, an early Marilyn Mason music video, when mixed with a combination of fast-food and adult beverages is far more likely to cause you to perform the technicolor yawn.

Or so I recall.

And now that I’ve had the satisfaction of employing several of my favorite terms for vomiting, all in one post – what do you think of the newly rediscovered, formerly-chucked-out-the-window score for The Exorcist? Post a comment here or drop a line, tied to a can of pea soup, to sue@blackgate.com.