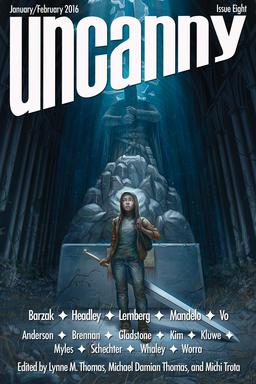 Uncanny editors Lynn and Michael Thomas return from the Chicago TARDIS convention with an impassioned plea for increased accessibility, in their editorial in the January/February issue.

One of the reasons this convention is such a joy for us is Chicago TARDIS and its staff are very attentive to accessibility… We go to a ton of conventions for work, and, sadly, this isn’t always the case. Many excellent conventions are addressing accessibility at their events, and improving every year, which we absolutely applaud and appreciate. Others have resisted, even though it’s both the right thing to do and a US federal law thanks to the Americans with Disabilities Act. After some recent conventions had some major failures with their accessibility again, we and Mary Robinette Kowal — with help from many others — felt it was necessary to create an SF/F Convention Accessibility Pledge, similar to the John Scalzi pledge about not attending conventions without harassment policies. Hundreds have signed the pledge, and it has also been covered by io9 Most importantly, we’re seeing many convention staff members joining together to share information and work to make their conventions more accessible. That’s awesome, and frankly, the point of the whole thing. Fandom is for everyone, including people with disabilities.

All of the content became available for purchase as an eBook (PDF, EPUB, MOBI) on January 1, 2016.

“The Virgin Played Bass” by Maria Dahvana Headley
“The Spy Who Never Grew Up” by Sarah Rees Brennan (from Kiss Me Deadly: 13 Tales of Paranormal Love, 2010)
“Lotus Face and the Fox” by Nghi Vo
“The Creeping Women” by Christopher Barzak
“The Desert Glassmaker and the Jeweler of Berevyar” by Rose Lemberg
“The Sincerity Game” by Brit Mandelo

“tended, tangled, and veined” by Kayla Whaley
“The Exquisite Banality of Space” by Leslie J. Anderson
“Narrative of the Naga’s Heirs” by Bryan Thao Worra

Episode 8B: Editors’ Introduction, Brit Mandelo’s “The Sincerity Game” (as read by Amal El–Mohtar), Bryan Thao Worra’s “Narrative of the Naga’s Heirs” (as read by Erika Ensign), and an interview with Brit Mandelo conducted by Deborah Stanish.

The cover this month, “Round Three,” is by Priscilla H. Kim.

Curious about how Uncanny does such great podcasts? Lynne and Michael pull back the curtain in their recent article for us, Behind the Microphones: How the Uncanny Magazine Podcast Gets Made.