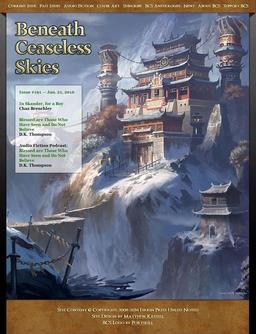 The January 21st issue of Beneath Ceaseless Skies, issue #191, has original short fiction from Chaz Brenchley and D.K. Thompson, a podcast, and a reprint by Dean Wells.

“In Skander, for a Boy” by Chaz Brenchley
I was sure this boy did know a back way to the kitchens. That was his Skander, and his experience: covert, insinuating, conditional. Not mine. “This is my way, my king’s way,” in through the front door to ask straightforwardly for what I wanted. They would see Rulf at my back, and all his ships behind him; they would not refuse me. In and out.

“Blessed are Those Who Have Seen and Do Not Believe” by D.K. Thompson
I chuckled, cracked open my pistol’s cylinder, and loaded it with the wooden ammunition. “Don’t worry, my dear,” I said, and tucked the gun in my waistband. “There’s plenty of time before sunrise.”

Audio Fiction Podcast:
“Blessed are Those Who Have Seen and Do Not Believe” by D.K. Thompson

From the Archives:
“To the Gods of Time and Engines, a Gift” by Dean Wells (from BCS #80, October 20, 2011)
The silent commands were with her all the time now, haunting and familiar.

Chaz Brenchley is the author of the six-volume fantasy series The Books of Outremer, as well as Bridge of Dreams and River of the World. D.K. Thompson has also sold fiction to Apex, Bull Spec, Drabblecast, Pseudopod, and Escape Pod; his first collection And Welcome Back will be released later this year. Dean Wells has also been published in Ideomancer, Eldritch Tales, ShadowKeep Magazine, 10Flash Quarterly, and The Nocturnal Lyric.

The cover art is “Huashan Temple” by Xiao Ran.

We last covered Beneath Ceaseless Skies with issue #190.