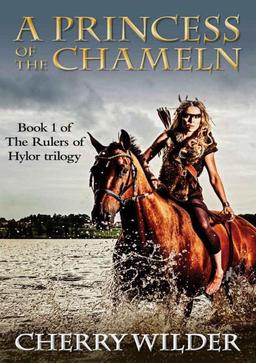 Cherry Wilder was the pseudonym of New Zealand SF and fantasy writer Cherry Barbara Grimm, who died in 2002. She produced many popular fantasy novels in the late 70s and early 80s, starting with the Torin trilogy (which we discussed back in July), and the four novels in the Rulers of Hylor series (A Princess of the Chameln, Yorath the Wolf, The Summer’s King, and The Wanderer; the last co-written with Katya Reimann). Sadly, all have been out of print in the US for thirty years.

Fortunately, Open Road is taking steps to rectify that. They published a digital version of A Princess of the Chameln on November 17, and next month they will offer a print-on-demand edition. Here’s the new description.

When her royal parents are killed during a coup, Princess Aidris Am Firn of the Chameln flees for her life. Constantly on the run from unseen enemies of the crown, she poses as a commoner and joins a cadre of women warriors so she can fight those who assassinated her parents and continue to hunt her. While cultivating allies, Aidris learns that two pretenders have ascended to the dual thrones of Chameln. Having discovered their true queen is still alive, counselors from Chameln rally to her side and convince the queen that the time has come for her to reclaim her birthright. But before she can do this, she must discover who her enemy really is, lest the unknown assassins strike her down too.

The other books in the series will follow shortly: Yorath the Wolf (ebook February 16, POD April 12) and The Summer’s King (ebook May 17, POD July 12). Open Road is also responsible for the fabulous Complete Short Fiction of Clifford D. Simak, the 14-volume series we examined here.