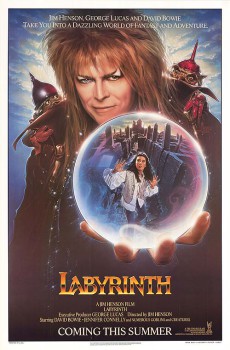 I’m not going to talk about his musical or cultural influence (which was prodigious), or his film career (he was possibly the best actor among those recognized first and foremost as singers). If you want to explore all that (as well you should), the papers and blogs will be inundated with it for days to come.

My own brief contribution to the media buzz is only this: I’m going to take a moment to offer another little reason why his passing warrants note here on Black Gate. And no, it’s not just because he was Jareth the Goblin King in Jim Henson’s wonderful fantasy film Labyrinth (1986) — although that alone might be reason enough. Nor that in other roles both in film (The Man Who Fell to Earth [1976]) and on stage (e.g. Ziggy Stardust and the Spiders from Mars) he often portrayed himself as an extraterrestrial, a man visiting our planet from the stars.

The narrator in this song is listening to the radio late one night when he hears something else coming through: “Came back like a slow voice on a wave of phase / That weren’t no DJ that was hazy cosmic jive.”

Who is it? The chorus reveals: 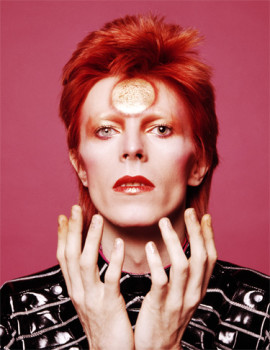 The narrator calls a friend — you, it turns out, as he addresses the listener directly — and discovers that you’ve been picking up these transmissions as well. He suggests switching on the TV to channel two, perhaps to pick up the transmission through that other primitive media device.

Then come the lines that make me chuckle every time I play this song:

“Look out your window I can see his light / If we can sparkle he may land tonight / Don’t tell your poppa or he’ll get us locked up in fright.”

Indeed, the old guard often get pretty uptight and don’t know what to make of the new, whether it comes in the form of pulp fiction, comic books, rock ‘n roll (in whatever iteration the young ‘uns are playing it at the time), role-playing games, television, film, video games, and whatever bugaboo is next on the horizon.

This is quite possibly one of my favorite songs, one I can (and do) listen to over and over again. A tour de force of musical and vocal hooks, the song itself seems to be a paean to the evolution of the human species — “You gotta make way for the Homo Superior.” It’s a sentiment expressed in much of our popular entertainment, from superhero comics and films to science fiction of a more positive bent. It can be a little frightening: “All the nightmares came today / And it looks as though they’re here to stay.”

Through his androgynous glam-rock personae, Bowie himself forecast a culture more open and comfortable with gender diversity. With his alien blood, he was somehow above it all — all the b.s. rigid patriarchal constructions and prejudices and puritan self-righteous bigotry — and allowed us to see it all from that more objective plane. What do we look like from the perspective of the homo superior, the higher self: primates down here trying to rise above, to disentangle ourselves from these bestial roots to attain the level of gods and angels that we have the capacity to become. We have — quite literally — stardust within us. Maybe you’ve heard him coming through on the radio? He’s reminding us that we, too, are children of the stars.

Let’s not forget the very early material when his theater training was still uppermost in his musical mind. The lunacy of “The Laughing Gnome” typecast him as silly, but “When I Live My Dream” is flat-out fantasy-land, with lyrics like this:

“Baby, I’d slay a dragon for you
Or banish wicked giants from the land…”

The world is certainly a poorer place for his absence.

As I have been watching and rewatching his various music videos today, one thing I noticed is how much he smiled as he sang. Clearly he was a man who loved life, loved performing, and loved music.

He has left a prodigious body of work that I look forward to exploring further. I must confess that my own appreciation of Bowie thus far has been limited mostly to listening to his 2-CD greatest hits album (over and over and over again) on my commutes between home and work the past couple summers. I’ve probably watched Labyrinth about a dozen times, and could watch it a dozen times more before I depart.

Nevertheless, given only this selective familiarity with his work, it is clear to me that he was — well, before I use a word that is overused, let me back up and say this: there are countless good artists out there. You can go into any just about any city or town tonight and find a good artist performing in a pub or a coffeehouse. There are also a good many great artists — more than it is reasonable to keep up with unless you are, say, a full-time music critic. (As can be said across the arts — how many great writers have you not read because there simply is not enough time in the day to do that much reading?) But then we get to the upper echelon: the artists who are on a whole other level, the thin, rarified ranks of the true geniuses.

Bowie was one of those. When he passed away, one of the great lights went out.

I can’t wait to listen to his “parting gift,” Blackstar.

Bowie was truly a legend. One of his songs that seemed to me to be overtly influenced by the fantasy genre is Wild-Eyed Boy from Freecloud.

Nick, if you liked his 2-cd set, you owe it to yourself to listen to discover his albums, even the 1 or 2 determined to be “duds” have worthwhile material on them. The rest…you’ll be lucky to find one or two bad tracks. I’ve collected all my favorite Bowie songs together in one collection, weighing in at a staggering 230 songs. He rarely phoned it in.

Frankly, now I’m on the edge of the freak – out…

It seems there’s going to be a re-make of Labyrinth – but again likely a soul-less “Re-Boot” with nothing added, only stuff taken – and to alienate the fan base likely CG when any fans (even me this time) would say “Just hire Froud and plan for a LOT of toy spin offs”…