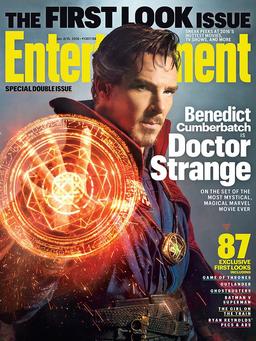 The new issue of Entertainment Weekly, on sale tomorrow, offers us our first peek at Benedict Cumberbatch as sorcerer supreme Dr. Strange — and they’ve really nailed the look. As James Whitbrook at io9 puts it:

I am genuinely shocked at how close this adheres to Strange’s classic costume from the comics — it’s all there, the color scheme, the cloak, the eye of Agamotto dangling from his neck, It’s all there — right down to Strange’s greying hair. It really has leapt off the page of a Doctor Strange comic into real life, and it looks great.

Click the image at right for a bigger version.

Doctor Strange is one of two films in the Marvel Cinematic Universe scheduled to be released next year; the other is Captain America: Civil War (May 6). Principal photography on Dr Strange began last month, and it is scheduled to be released November 4. It also stars Tilda Swinton, Rachel McAdams, Chiwetel Ejiofor, and Mads Mikkelsen, and is directed by Scott Derrickson (The Messengers, Sinister).

The article reportedly will reveal the roles played by Cumberbatch’s co-stars for the first time. Read more details at the EW website, or read the complete article in the print issue. We last covered Entertainment Weekly with the February 2013 issue, which coincidentally featured Benedict Cumberbatch as Khan in Star Trek Into Darkness.

I enjoyed Star Wars but I’m looking forward to civil war and dr strange a lot more. I can’t believe they got him for this role. It must be like antman and only have 1 or 2 higher paid actors.

I’ve enjoyed him in everything I’ve seen, even the Imitation Game. Which isn’t a genre I would normally watch.

I think Dr. Strange will get his due. I’m looking forward to it.