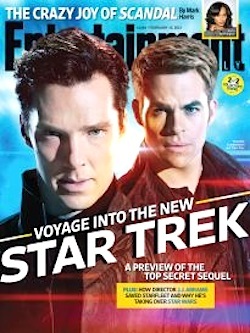 In a sharp-eyed bit of investigative reporting, Tor.com has reproduced screenshots from the Entertainment Weekly Back Issues store that name the villain in the upcoming J.J. Abrams film Star Trek Into Darkness as Khan.

As we reported back in December, speculation has been rampant around just whom Benedict Cumberbatch will be playing in the new film. IMDB originally listed his character as Gary Mitchell, the Enterprise officer who becomes an all-powerful psychic loonie in one of the show’s earliest and best episodes, “Where No Man Has Gone Before.” Rumors that he was playing Khan, the genetically-engineered supervillain originally portrayed by Ricardo Montalban in the episode “Space Seed” and the film Star Trek II: The Wrath of Khan, eventually led the otherwise tight-lipped Cumberbatch to deny it.

As shown by Tor.com however, screen captures for the February 15 cover-dated issue of Entertainment Weekly allow you to select one of two covers, the “Spock & Kirk” cover, or the “Kirk & Khan” version.

EW hastily deleted the notations, and the latest version of the page gives no such identifiers.

The latest Super Bowl TV trailer for the film has been posted on YouTube. Star Trek Into Darkness is directed by J. J. Abrams, and is set for release on May 17, 2013. As we reported in January, Abrams was also selected as the director for the next Star Wars film.

Meanwhile, there’s no truth to the rumor floating in fan circles that J.J. Abrams will also be tapped as the new pope.

Credit to Harry Connolly for the pope joke.

The glowing eyes alone would make him a compelling candidate.