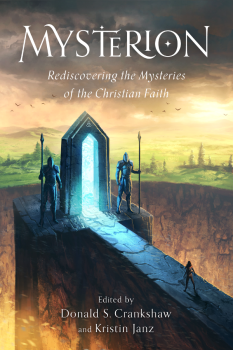 I’ve discussed Mysterion: Rediscovering the Mysteries of the Christian Faith, the anthology my wife and I are editing and publishing, on Black Gate before (here and here). We’re nearing the end of our submissions period, so I thought I’d discuss some of what’s going on with us. There’s a week left until submissions close on December 25th, so there’s still time to submit if you’d like to.

I’ve been keeping track of submissions on a weekly basis. As of Wednesday, we’ve received 385 submissions since we opened on October 15th, of which we’ve responded to 315. Most of those were rejections, but we’re currently holding 39 stories that we’re interested in publishing.

At this rate, it looks pretty certain that we’ll pass 400 submissions overall. It’s even possible that we’ll pass 500, if we get a surge in the last week equal to what we got in the first week, but I think we’ll probably end up somewhere between 425-450.

Since I like numbers, here’s a chart showing the number of stories we’ve read, rejected, and decided to hold for each week. I added labels for the number held, as otherwise it’s hard to read on this scale. 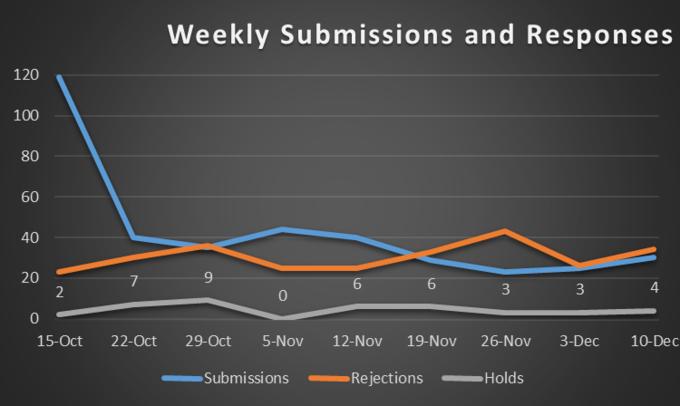 While we’ll be holding around 50 at the end, we won’t be able to publish that many. 50 gives us a good selection to choose from once we pick the 17 or so that we’ll publish in the anthology. I say 17, since that’s approximately the number of stories we’ll have room for with our 85,000 word story budget (increased from 80,000 thanks to our Patreon campaign–and it may increase to 90,000 if we receive more pledges). The actual number of stories depends on how long the stories are–one 10,000 word story would replace two 5,000 word stories, or two 4,000 words stories would leave room for an extra 2,000 word story.

But while our budget will decide the maximum number of stories, we still need to choose the stories. And a lot of what will influence our decisions will be our attempt at achieving variety. We’ll want some shorter stories and some longer ones. We’ll want a good distribution of genres, between fantasy, science fiction, horror, and what we call spiritual (those stories where the only speculative element is Christian cosmology). We’ll need to limit the number of angel stories (we have a lot of those). We’ll have to avoid publishing stories which have similar concepts. We’ll want to limit reprints to 25% of the stories. A lot of good stories will have to be rejected because they don’t contribute to the variety we’re looking for. But I’m looking forward to choosing which stories will make up the anthology.