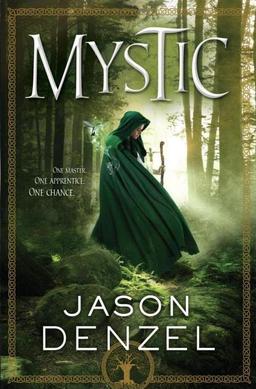 Jason Denzel has been immersed in the world of high fantasy for decades — he’s the founder of Dragonmount, the popular online community for fans of Robert Jordan’s The Wheel of Time. His debut fantasy novel Mystic, the tale of a strange teenager with humble origins who’s chosen as a candidate for the most powerful magical position in the land, is the opening volume of The Mystic Trilogy. It arrived in hardcover from Tor last month.

I called to the Myst, and it sent us you.

For hundreds of years, high-born nobles have competed for the chance to learn of the Myst. Powerful, revered, and often reclusive, Mystics have the unique ability to summon and manipulate the Myst: the underlying energy that lives at the heart of the universe. Once in a very great while, they take an apprentice, always from the most privileged sects of society. Such has always been the tradition — until a new High Mystic takes her seat and chooses Pomella AnDone, a restless, low-born teenager, as a candidate.

Commoners have never been welcomed among the select few given the opportunity to rise beyond even the highest nobility. So when Pomella chooses to accept the summons and journey to Kelt Apar, she knows that she will have more to contend with than the competition for the apprenticeship.

Breaking both law and tradition, Pomella undergoes three trials against the other candidates to prove her worthiness. As the trials unfold, Pomella navigates a deadly world of intolerance and betrayal, unaware that ruthless conspirators intend to make her suffer for having the audacity to seek to unravel the secrets of the Myst.