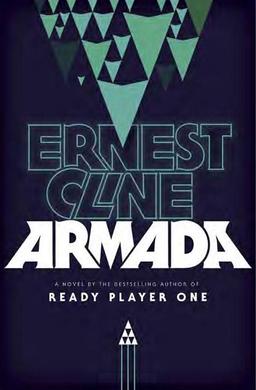 Ernest Cline’s 2011 debut novel Ready Player One was quite the achievement. As I said in my review earlier this year here at Black Gate, Ready Player One was more than just a cute cyberpunk romp. I think it showed real ingenuity, portraying what science fiction could be for a new generation. And I thoroughly enjoyed it! It’s no surprise to me that Steven Spielberg is slated to direct a movie version, hopefully sometime in the near future. I was incredibly excited about reading Ernest Cline’s second novel Armada.

There are quite a few similarities between Armada and Ready Player One. For example, Armada‘s protagonist, Zack Lightman, fits the standard NSA profile for contemporary geek: young loner who spends more time in a make-believe world of science fiction and fantasy books, movies, and videogames than he does in the “real” world. Zack particularly dreams of flying off on some grand space-faring adventure, mainly because he spends most of his time on a hugely popular online flight simulator called, coincidentally, Armada.

Zack later learns, however, along with everyone else on the planet, that the Armada game is actually a testing device for evaluating and then recruiting people for real spaceflight and warfare against an alien force. And — surprise, surprise — it turns out that Zack Lightman is one of the top players. Does this sound anything like The Last Starfighter to anyone? Similar, but not quite.

That’s as much of a spoiler as I will give here — no more than what’s on the cover flap or book blurb on Amazon. But, as with Ready Player One, Cline takes us on a heady, rollicking sci-fi adventure, with some great surprises. Also like his former book, Armada is very much a coming-of-age story, fitting squarely into publishers’ much desired “young adult” slot. But, unsurprisingly, Armada also hearkens back to typical classic adventures that many of us older sots grew up with (e.g. Lloyd Alexander’s Chronicles of Prydain). As a middle aged guy, I found the story of Armada to be quite good.

After reading both of his novels, it’s clear that Cline’s greatest strength as a writer is his ability to tell a contemporary young person’s story, with all of the tech-culture savviness that implies, while still very much appealing to the pop-culture of bygone years (yet fairly recent decades). The result is a slick and stylish potpourri of geeky hipness. I think Cline should be required reading for all who aspire to be science fiction writers today.

All of the positive being said, I have to say that Cline’s writing, generally, can also tend to feel unrealistic at times. Not necessarily because of the fantastic elements, but because the characters, particularly the young ones, sometimes sound more like the snarky kids that one typically sees on television or in movies. Their dialogue can be too mature, too cynical, or too satirical for their own (young) good. And one wonders if this isn’t purposeful, given that Cline seems to have more screenwriter instincts than the average novelist.

Moreover, Armada may suffer from what can be called a “sophomore slump.” Ready Player One was so good that perhaps any second book from Cline would be felt to have missed expectations — to some degree.

For example, Armada takes quite awhile to get going. It was a very slow burn at first. However, once it did get up to speed, it quickly became a fairly addictive page-turner-thriller like Ready Player One.

I think Armada also fell short towards the end; it couldn’t quite live up to the tension it mounted. And the ending, at best, was fairly ambiguous. This may be because, from what I understand, sci-fi authors tend to be stuck with one of two choices when including alien invaders into a story: the aliens want to eat/kill us, or they are benevolent god-like beings who want to share all of their vast and advanced know-how and peace-lovingness with us. Cline picks something in the middle here. But it didn’t feel like it worked for me.

Nevertheless, Armada is a very good book. I recommend it, though I (highly!) suggest reading Ready Player One first.

James McGlothlin’s last review for us was The Best Horror of the Year: Volume Seven.

I liked RP1 but I hated Armada. I spent most of the book, right through the end, in incredulity. The book really is its plot summary – secret Very Serious Earth Force fighting alien invasion in which Our Hero, recruited through video game talent, saves the day. No cliche is left unused, no character is anything but a stereotype.

I don’t think it was all that bad, but I get where you’re coming from.

I think Armada was a real let-down compared to Ready Player One. In some ways it felt more like a movie script than a good novel. I hope that’s not what Cline was going for.