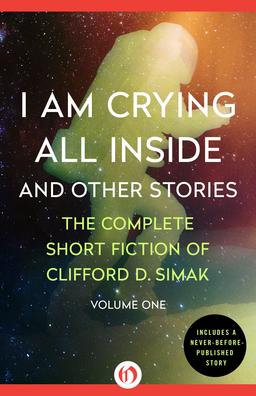 Last month I made some noise here at Black Gate about The Complete Short Fiction of Clifford D. Simak — the long-awaited multi-volume project from Open Road Media. Six volumes have been announced so far, and three were released on October 20.

Over at Locus Online, Paul Di Filippo asks if this is finally the beginning of the Simak Renaissance.

Much as I loved Heinlein’s work, I loved Simak’s more, in what was perhaps a different fashion. If you can imagine both men as uncles, then Heinlein was the loudly dressed, blustering uncle who blew into town once a year from Manhattan, trailing clouds of glory from his exotic exploits and dazzling you with his cosmopolitan ways; whereas Simak was your local bachelor uncle who lived modestly in a cabin and who could always be counted on to fix your bike or take you fishing or console you when your dog died. And he never mentioned that he had a Purple Heart medal tucked away in his sock drawer.

But precisely by having this unassuming nature, in both his personality and on the page, Simak did not generate as many headlines or partisans as did Heinlein. And since his death, it seems to me that his star has unjustifiably faded a bit. There was a laudable attempt a decade ago to get all his stories into print. But the project fell apart after only two (now highly collectible) volumes: Physician to the Universe and Eternity Lost & Other Stories.

Now comes Open Road Media with the stated intention of issuing all of his short fiction in fourteen books. Hooray! Maybe the Simak Renaissance is finally here!

For me, Simak’s defining quality is the humaneness of his vision. I couldn’t do without Heinlein, but gentleness, empathy, and mercy are not his outstanding features.

> For me, Simak’s defining quality is the humaneness of his vision.

Indeed. I’m far more a Simak fan than I am a Heinlein fan, and that’s a big part of the reason.

> If any Golden Age writer deserves to avoid the memory hole, it’s Simak.