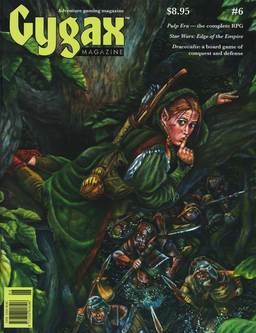 I saw a report that the latest issue of Gygax magazine had hit the stands, and checked out the TSR website this morning. Sure enough, it’s now available, and there’s even a very sharp video showcasing the contents and the great layout.

This issue has content for Dungeons & Dragons and Star Wars: Edge of the Empire, plus a superhero roleplaying from Steve Kenson, Pulp Era. Here’s the issue contents:

Every issue of Gygax includes a fold-out adventure or game, and this time it’s a complete board game of dragons attacking, capturing, and destroying cities: Dracovalis, by Jeremy Olson and illustrated by Aaron Williams.

In addition to the articles and games, there are of course the regular comics, Full Frontal Nerdity by Aaron Williams and Order of the Stick by Rich Burlew.

The cover this issue is by Jim Holloway, who’s well known for his original TSR illustrations, including several Dragon and first edition module covers (The Land Beyond the Magic Mirror and Dungeonland), and especially as the original artist for the Paranoia role-playing game.

Gygax #6 was edited by Jayson Elliot and published by TSR. It is 68 pages, priced at $8.95 for the print edition, or $4.99 for a watermarked PDF. A one year subscription (4 issues) is $35. Order copies directly from the website or through Drive-Thru RPG.

Did I, or did I not, leave a comment?

It sure does! She’s even wearing the same outfit. 🙂

You did, but comments with hyperlinks need Admin approval before they go live (that’s a spam prevention thing.)