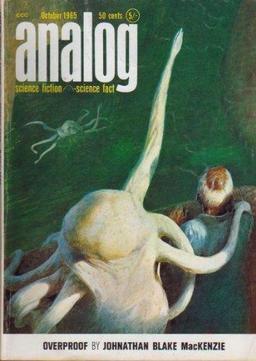 I’ve been listing copies of Analog (from a lot I acquired over the summer) on eBay for some time, and looking through them as I have. What strikes me forcefully — though of course I had been aware of it for years, being old enough to remember when JWC was still editing — is how John Campbell had an eerie ability to be wrong about just about everything, from Dianetics to the Dean Drive to supporting George Wallace in the 1968 election to the statement that television would never catch on because you’d have to stop what you’re doing and WATCH it.

It goes on and on, rather relentlessly. Only in Analog would you find, as late as the 1960s, an article on the positive benefits of smoking.

The latest one I’ve come across is the editorial in the October 1965 issue, in which Campbell lambastes largely straw-men “Litteraeurs” on their inability to write, dismissing approved mainstream literature (about which I suspect he knew very little) as “sex in suburbia” and making the famous claim that he gets more printable manuscripts from Cal Tech or Harvard Law School than from the Harvard Literature department. “How come they keep turning out Literature graduates that can’t sell stories?”

Of course the fallacy here is that the purpose of Literature departments is to turn out writers, and that “sell stories” means sell stories to Analog. I am sure the editors of The New Yorker or the major literary magazines would have had a different view. But this was a very common Philistine cant at one time. From at least the New Wave period, all the way up to the Sad Puppies, we have heard the complaint that these damned Literature majors are ruining Science Fiction.

That John Campbell was unquestionably a great editor while being so wrong about so many things is hard to explain — thought it does explain why the field seemed to be leaving him behind by the last few years of his life.

Incidentally, there is new research suggesting the positive health benefits of nicotine (not smoking, though): http://uk.reuters.com/article/2015/05/19/us-health-nicotine-insight-idUKKBN0O412Q20150519

Re NOLAbert: Committing the straw man fallacy means demolishing the caricature of an argument rather than the argument itself. Arguing that someone is wrong about one thing because they are wrong about other things would, I think, be plain old ad hominem. But I note that Darrell is committing neither here, because he begins his fourth paragraph with a brief explanation as to why Campbell was wrong.

I only wish he had treated us to some quotes. It would be interesting to compare them with some of the things one encounters on the web these days.

Well, I don’t know. Campbell was a highly intelligent, fiercely independent man who had a job that practically required him to be decisive and opinionated. That would seem to be a foolproof formula for being wrong a hell of a lot of the time. To go through all of his writings and public and private pronouncements looking for his “wrongness ratio” would be soul-crushing for whoever had to do it, but it would likely yield some interesting results. I suspect he wasn’t far off the curve for comparable people. I also suspect being right wasn’t nearly as important to him as being entertaining, provocative, and even downright infuriating. I have the collection of his editorials that was put together after his death by (I think) Harry Harrison, and that’s the impression I get from them. Boring and safe he wasn’t.

Raphael,well whether it’s a straw man argument or an ad hominem argument, I’m not sure the fourth paragraph explains to me why criticizing the influence of Literature on SFF is wrong. In fact, I would question whether the Sad Puppies really have argued that “these damned Literature majors are ruining science fiction.” Maybe that’s the caricature of the argument that I’m objecting to.

As an English major, English Ph.D., former literature professor, and even (briefly) an MFA student, I’m either living proof that leftie literati are agents of political correctness, or a walking refutation of that position, depending on how politically correct one thinks my taste is.

So Puppy comments in that vein really stand out for me, as you might imagine. I don’t recall who made the ones I read, but it was here at Black Gate.

I’m an English minor, considered going the MFA route (was advised to avoid the financial anguish of trying to make a living as a writer by my senior creative writing professor), then went the Ph.D. in psychology route and now enjoy the temporal anguish of being a prof. at a university with a 4/4 teaching load (the money isn’t great either, but I don’t complain since I make more money on my 9 month salary than my working class parents ever did even accounting for inflation).

I’m no sad puppy, but I’ve read a fair amount of the blog posts of Torgerson, Correia, and Hoyt. At least from them, I haven’t seen the comment that “literature majors are ruining sci-fi.” I have seen lots of criticism of literature-like approaches to SFF. As I’ve expressed it before (so this is my complaint, but I’ll add a big grain of salt here, because I’m not particularly well-read regarding contemporary SFF), the complaint is a focus on sub-text over story.

I’ll give you an example of my own. One of the current books I’m reading is the John Joseph Adams edited Wastelands: Stories of the Apocalpse Anthology. I love post-apocalyptic fantasy (I also love short stories, which I think are underappreciated, perhaps even moreso in SFF than literary fiction). So far I’ve been mostly disappointed with the anthology. The cover of the book depicts a gas mask wearing, WWI looking survivor in front of a destroyed cityscape. He’s carrying a semi-auto handgun. Most of the stories in the anthology so far, have depicted the post-apocalypse in about every way EXCEPT like the cover. The last story was an absolute bore although it started out really promising. It was “And the Deep Blue Sea” by Elizabeth Bear. She hooked me right away. Motorcycle messenger has to deliver an important package across the wasteland. Awesome! But it turns out the story is really a Faustian allegory. When Harrie first encounters Nick, I knew what was going on. I trudged through the rest of the story, but I had a hard time sticking with it, thinking how that great premise could have been better realized.

That’s one hard-working story! Bear has sold reprint rights for it to several anthologies, including the one I co-edited.

Darrell: thanks for writing We Are All Legends. I’d ask for a sequel, but I can’t think how you’d do it.