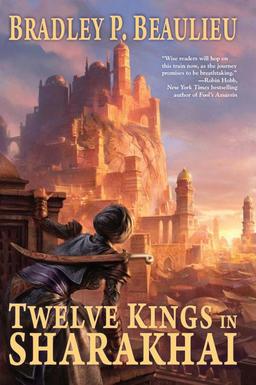 Eleven years ago, Çedamihn Ahyanesh’ala’s mother was killed by the immortal Twelve Kings that rule the desert city of Sharakhai. Çeda — as she’s known to a few close friends — doesn’t know why her mother was killed. She only has three clues: the Kings carved strange symbols into her mother’s skin before they killed her; a book of poems that belonged to her mother; and the fact that she can never reveal she was her mother’s daughter.

Along with her friend Emre — one of only a handful of people who know her true identity — Çeda earns money on the streets of Sharakhai by delivering messages and cutting the occasional purse. By the time she is a young adult, she earns money with a new identity: the White Wolf, one of the most feared and respected hand warriors in the fighting pits.

Only Emre knows the secret deep within her heart: she means to avenge her mother’s death by killing the immortal Kings that rule the city. But in order to do so, she has to face her fears, make allies out of enemies, and risk losing everything she cherishes.

The world building here is robust yet deft. There are several elements in play, such as the mythology that governs the Kings, the magic of the forbidden forest on the outskirts of the city, and the creatures called the asirim that roam Sharakhai every six weeks to prey upon the city’s inhabitants.

The city itself is populated with merchants, university scholars, and crime lords. The people travel the desert using skiffs that travel over the sand as though a boat would travel over water. Petals from the flowers that bloom from the forbidden adichara trees act as a performance – enhancing drug. All of these elements are woven together so seamlessly that it’s easy to forget Sharakhai isn’t a real city hidden somewhere in the Middle East.

This story is epic in nature and as such, there are dozens of characters on the page. Even so, each is unique and stands on their own. Çeda is strong-willed and cares deeply for her friends; Emre is spontaneous to the point of impetuousness and, while he likes to spend the night with beautiful women, is fiercely loyal to Çeda; and Osman, the owner of the fighting pits, has an agenda outside of owning a legitimate business. Each of the Kings has their own role to play, as do the Blade Maidens (the cabal of women who guard the Kings).

Throughout the course of the story, the importance of apparently minor characters is revealed. Again, Beaulieu’s shows great deftness at weaving together characters and their motivations with each other and the world at large.

We learn Çeda’s backstory through numerous flashbacks sprinkled throughout the novel. Beaulieu employs this sometimes hackneyed device to great effect in Twelve Kings. Each of the flashbacks stands on their own as though they were short stories buried within the larger story arc. These chapters give us bits of information integral to the overall plot while adding complexity to several characters. Instead of distracting from the “real story,” I found the flashbacks to be entertaining in their own right.

Another strength of this novel is the fight scenes. Twelve Kings opens with Çeda — aka the legendary White Wolf — about to encounter an opponent in the pits. The action immediately put me in the middle of Çeda’s world. The fight sequences throughout are tense and well-written, and while sometimes bloody, never gratuitously so. If I had a complaint, it would be that I wanted to see Çeda fight more opponents. However, the ending suggests that she will fight several more battles before her story comes to an end.

Overall, Twelve Kings in Sharakhai is a complex novel with crisp prose that is a joy to read. After finishing it, I found myself thinking of certain characters and wondering what would happen to them next. After a few days, I wanted to pick up the book and read it again. I can’t think of a better endorsement than that.

Kelly Swails’ last review for us was “Station Eleven = The Stand + The Road – (Supernatural Occurrences + Cannibalism).”