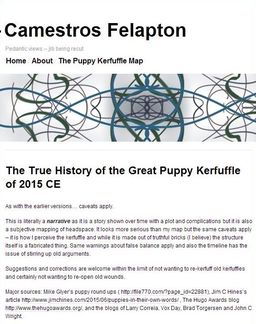 If you’re feeling a certain degree of Hugo controversy exhaustion, no one could blame you. The past few days have seen an explosion of debate and analysis, here and elsewhere, since the winners of the 2015 Hugo Awards were announced late Saturday night.

If you’re a little late to the party, or just not following events all that closely this year, the high volume of virtual high-fives and angry rebukes ricocheting around every corner of the genre is probably pretty confusing. Figuring it all out at this late date probably seems a little daunting. I would have agreed, until I stumbled across this summary of the entire affair by Camestros Felapton, “The True History of the Great Puppy Kerfuffle of 2015,” a marvel of compact narrative. I do believe it has captured virtually every event of importance in the whole affair, with the sole exception of Amal El-Mohtar’s June 2013 call to expel Theodore Beale from SFWA, which arguably triggered Vox Day’s two year scheme for revenge against the entire industry. Here’s Felapton’s intro:

This is literally a narrative as it is a story shown over time with a plot and complications but it is also a subjective mapping of headspace. It looks more serious than my map but the same caveats apply – it is how I perceive the kerfuffle and while it is made out of truthful bricks (I believe) the structure itself is a fabricated thing. Same warnings about false balance apply and also the timeline has the issue of stirring up old arguments.

See the thing in its mind-boggling entirety here.