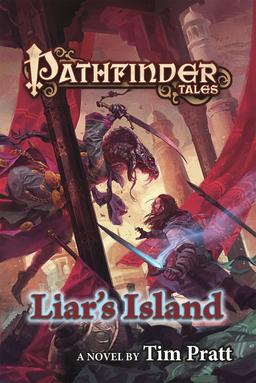 Tim Pratt, who also writes the Marla Mason fantasy series under the name T A Pratt, is one of the most popular authors in the Pathfinder Tales stable. His previous Pathfinder books include Reign of Stars and City of the Fallen Sky, and his last tale of Rodrick the thief, Liar’s Blade, was called “Fafhrd-and-Grey-Mouser-style sword and sorcery adventure” by SF Signal. His latest, Liar’s Island, on sale next week from Tor, sees Rodrick and his magical sword Hrym called to the court of the exotic southern island, Jalmeray, where they become pawns in a dangerous game of political intrigue… and the only way to escape is to find a legendary artifact.

A Thief and His Sword

Rodrick is a con man as charming as he is cunning. Hrym is a talking sword of magical ice, with the soul and spells of an ancient dragon. Together, the two travel the world, parting the gullible from their gold and freezing their enemies in their tracks. But when the two get summoned to the mysterious island of Jalmeray by a king with genies and elementals at his command, they’ll need all their wits and charm if they’re going to escape with the greatest prize of all — their lives.

Our most recent Pathfinder coverage includes Howard Andrew Jones’ upcoming Beyond the Pool of Stars, Dave Gross’ Lord of Runes, and The Emerald Spire Superdungeon.