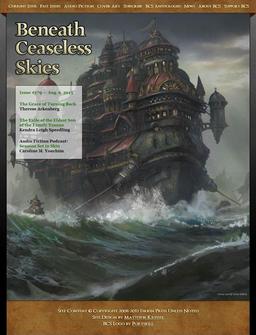 Beneath Ceaseless Skies #179 has new stories by Therese Arkenberg and Kendra Leigh Speedling, and a podcast by Caroline M. Yoachim.

“The Grace of Turning Back” by Therese Arkenberg
Semira watched Aniver hold audience with the Queen of the Dead, nerving herself to cross the river to them.

“The Exile of the Eldest Son of the Family Ysanne” by Kendra Leigh Speedling
I played the memory three more times. On the last time, I saw a hand reach down and take something.

Audio Fiction Podcast: “Seasons Set in Skin” by Caroline M. Yoachim
Horimachi’s own tattoos were from before the war, when black ink was made of soot instead of faery blood. Read by Tina Connolly.

The cover art this issue is “Kodran Migrant Fleet” by Tyler Edlin.

We last covered Beneath Ceaseless Skies with issue 178.