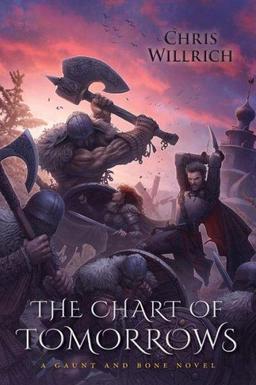 Back in May I published a brief head’s up about the latest Gaunt & Bone novel, The Chart of Tomorrows. I finally have a copy in my hot little hands, and I’m impatient to start reading it.

Chris Willrich’s “The Lions of Karthagar,” set in the world of Gaunt and Bone, appeared in the last issue of Black Gate. The first novels featuring the two heroes, The Scroll of Years (2013) and The Silk Map (2014), were both published by Pyr. In this third installment, the two find their plans to retire interrupted when their son becomes the chosen vessel of a powerful spirit…

The poet Persimmon Gaunt and the thief Imago Bone had sought only to retire from adventuring and start a family, but they never reckoned on their baby becoming the chosen vessel of the mystical energies of a distant Eastern land. With their son Innocence hunted by various factions hoping to use him as a tool, they kept him safe at the cost of trapping him in a pocket dimension of accelerated time.

Now free, the thirteen-year-old Innocence has rejected his parents and his “destiny” and has made dangerous friends in a barbaric Western land of dragon-prowed ships and rugged fjords. Desperately, Gaunt and Bone seek to track him down, along with their companion Snow Pine and her daughter A-Girl-Is-A-Joy, who was once trapped with Innocence too.

But as the nomadic Karvaks and their war-balloons strike west, and a troll-king spins his webs, and Joy is herself chosen by the spirit of the very land Innocence has fled to, Gaunt and Bone find themselves at the heart of a vast struggle — and their own son is emerging from that conflict as a force of evil. To save him and everything they know, they turn to a dangerous magical book, The Chart of Tomorrows, that reveals pathways through time. Upon the treacherous seas of history, Gaunt and Bone must face the darkness in each other’s pasts, in order to rescue their future.

Ok – First off, this requires I admit I don’t read EVERY single BG post. Sorry!!!

But I hadn’t previously noticed Gaunt and Bone. So I looked up ‘The Scroll of Years.’ This definitely appears to be my kind of fantasy!

It does look good though. So little time, so many books.