Karl Edward Wagner’s Kane is one of the greatest sword & sorcery heroes of all time. Reading him today is fairly problematic, however — most of his appearances were in small press magazines like Midnight Sun, which are almost impossible to find. Warner Paperback Library published the complete stories of Kane in five volumes in paperback between 1973 and 1978, and these slender books are highly sought by collectors.

Night Shade briefly returned the entire series to print in two volumes, Gods in Darkness (2002), collecting all three novels, and Midnight Sun (2003), which gathered all the short stories, but those sold out quickly and have been out of print for over a decade. Now Centipede Press is reprinting all five Warner volumes in hardcover editions, with new art, rare photos, and printed endpapers. All five are scheduled to be released on October 15. 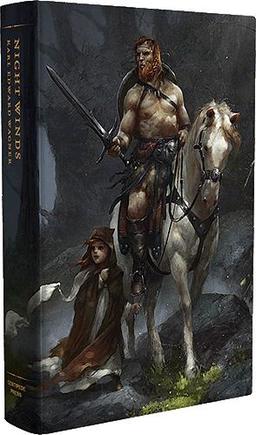 Kane, the mystic swordsman — an immortal, flame-haired sorcerer-warrior, cursed by an insane elder god to walk the Earth until eventually destroyed by the violence that he himself created.

Created by award-winning author and editor Karl Edward Wagner while he was still attending medical school, the most exciting and intelligent sword & sorcery series ever written is finally given the showcase it deserves with these stunning new illustrated editions from Centipede Press.

This handsome set of five hardcovers in a cloth slipcase includes the three main Kane novels — Dark Crusade, Bloodstone, and Darkness Weaves, along with the two volumes of short fiction — Death Angel’s Shadow and Night Winds — you finally have a chance to own meticulously proofread texts, with the short stories presented in the long-desired chronological order, with all of the poems, fragments, and later stories.

Each book has a handsome photograph of Karl Edward Wagner (some never published) from the period, and each book also reprints the original Warner Bros paperback edition cover so you have, finally, the complete Kane, presented the way the author intended, with each book individually illustrated.

All five volumes are priced at $60; Barnes & Noble and Amazon are already listing the books, with pre-order prices at around $40-$5 each. Centipede Press has a pre-order special of all five volumes for just $150, a considerable savings. There is also a signed, slipcased edition limited to 300 copies, that ships in September. It is priced at $350. 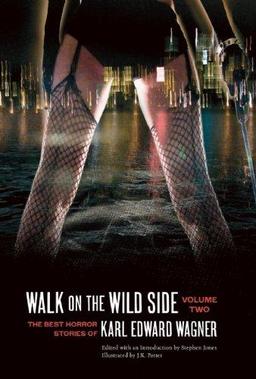 Our previous coverage of Kane includes:

Already preordered. But this is the first time I’ve seen all five covers. Dang, they’re lovely!

My understanding is that these should be the complete Kane, which I assume means that Death Angel’s Shadow or Night Winds will also include the later stories & fragments included in Midnight Sun.

I hope so, Joe. That would be marvelous.

Yep, I just got the contents from Jerad, and they do include everything from Midnight Sun, even the pieces not in the original paperbacks.

Thanks for feeding my sickness. I just ordered them.

Man, how am I gonna talk my wife into this purchase…?

Gorgeous covers, but I’ll hold out for someone to release the complete e-collection.

Uh, what about the Frazetta covers?

The current artist is good, but IMO Frazetta (RIP) was the best. His “Nightwinds” cover helped pull me into this genre way back even though I didn’t know about Kane till recently.

And to Jeff, you can get the E-texts from Amazon/GoogleBooks pretty cheaply:-)

Thanks, Green. The publisher’s site didn’t mention those.

The Centipede books do include the Frazetta covers, per the press release.

One note regarding the eBooks — they’re just reprints of the original paperbacks, so you’ll be missing some of the stories from the 1980s & 1990s — At First Just Ghostly, e.g., and the unfinished fragments.

Pre-ordered mine too. Been waiting for this for a while. Excited to read Kane without having to hunt around used book stores and eBay for the out of print copies.

> One note regarding the eBooks — they’re just reprints of the original paperbacks, so you’ll be missing some of the stories
> from the 1980s & 1990s — At First Just Ghostly, e.g., and the unfinished fragments.

This is a good point. The Centipede versions come with a PDF copy, correct?

>The Centipede versions come with a PDF copy, correct?

Not that I’m aware of, unfortunately — I think Jerad was just sending PDF copies of the tables of contents for people who wanted to confirm what the collections were going to include.

I’d love to see some kind of eBook release that includes the missing stuff, but I’m not sure if that would happen.

I would love to see an affordable set available as well, similar to the recent Roberr E Howard collections. Or possibly a single, oversized omnibus edition. I am really just looking to update my aging paperback versions…

Well, right now you can get the unsigned set for $150, which works out to $30 per volume, which doesn’t seem entirely unreasonable.

Great to see KEW staying in print. Did I miss mention of e-book format for these?