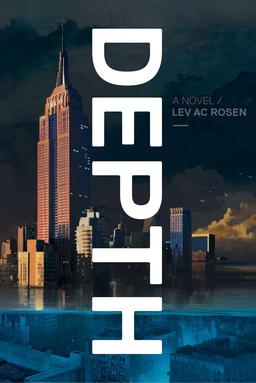 Lev AC Rosen is the author of All Men of Genius and the just-released Woundabout. But it’s his second novel, Depth, the tale of a private investigator whose routine surveillance case leads her to an impossible treasure in post-apocalyptic flooded New York City, that really grabbed my attention this year. Here’s what Lev said on his blog about the genesis of the novel:

I have a longstanding love of noir (I’ve even taught classes on it), and this book is near and dear to my heart. It’s a classic hardboiled noir… that happens to take place in NYC after global warming has melted the ice caps. New York is now a city of building tops, boats and bridges. It’s very far away from the conservative US mainland, and it operates differently.

Living in New York now, especially living in the financial district, I have a few things around me all the time; one is the constant… I don’t know what the word is. The financial district used to be this fantastic historical area – my building is over 100 years old. But there are so many new highrises going up, shiny, sleek looking condos. The moody vibe of 1930s and 40s NYC used to be, I think, most accessible in my neighborhood (when I moved in almost a decade ago). Now it feels fake, too modern, too rich. The grit is gone. I knew if I were going to write a noir, I’d have to bring that grit back somehow.

The other thing down here, of course, is the water. Even before Sandy, there were these great nights where I would be out walking and this heavy fog would come off the water and it would smell like the ocean and the dark would be silvery. And then, of course, Sandy hit – the day after my wedding – and my apartment got a moat. I got to see the first inklings of a New York with rivers instead of streets.

Both those things are what helped shape this. I wanted a noir that felt like the old Bogart and Bacall movies, but without being historical. So I went to the future – possibly not even that far – and I’m really proud of what I came up with.

When the polar ice caps melted, America’s East Coast became an underwater graveyard — except for New York City. Today, a million people make their home among the skyscrapers poking through the ocean waves. A million people who like to live by their own rules — including Simone Pierce, one of the best private investigators in the city.

It starts out as a routine surveillance job: cheating husband, attractive blonde. Something feels off, though, and when the husband turns up floating in the water with a hole in him, the cops like Simone for the murder. If she can just find the blonde, she’ll clear her name, but instead she stumbles onto a strange network of power brokers and art collectors, all looking for a treasure that can’t possibly exist. As she struggles to find the murderer, Simone is only sure of one thing: she can’t trust anybody, not even herself, because the city she grew up in might have more secrets than even she knows.

Depth is one of the first releases from ReganArts, the new imprint from producer and editor Judith Regan. It is 264 pages, priced at $24.95 and $10.99 for the digital edition.

Noir in climate-change flooded NYC? Why the hell didn’t I think of that?

My wife Alice is about halfway through it, and really enjoying it.