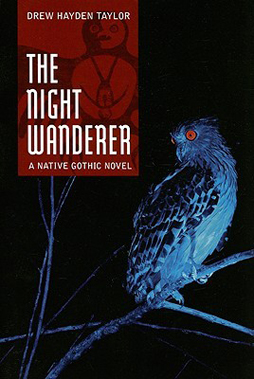 In 2007 Annick Press published a Young Adult tale called The Night Wanderer: A Native Gothic Novel by Drew Hayden Taylor, a veteran playwright, journalist, and essayist (as well as stand-up comic, TV writer, and documentary film-maker). The book follows a mysterious stranger who returns from Europe to the fictional Anishinabe (or Ojibway) Otter Lake Reserve in what is now Ontario, and a teenage girl whose life he ends up affecting. Taylor mentions in an afterword that the story began existence as a play which never quite satisfied him, until fifteen years later, while working with Annick Press on another project, he rewrote it as a prose novel. It’s since been adapted by Alison Kooistra into a graphic novel with art by Mike Wyatt.

In 2010 Taylor returned to Otter Lake with another novel, Motorcycles & Sweetgrass, published by Knopf Canada. In this story, an ancient trickster spirit comes to Otter Lake and becomes involved with the woman who’s currently the chief of the community. It’s longer and more complex than The Night Wanderer, and perhaps more fully exploits the freedoms of the novel form. Point-of-view is varied, and sub-plots more complex.

Both are charming books. Taylor’s prose is light, quick, and direct. His stories marry an earthy sense of reality with superhuman and supernatural figures who upend that reality by their basic nature. And his characters are well-drawn, sometimes broad but always interesting. Even when they’re confused about what they want, at least they want something at any given moment. As you’d expect from a playwright, the scenes move. 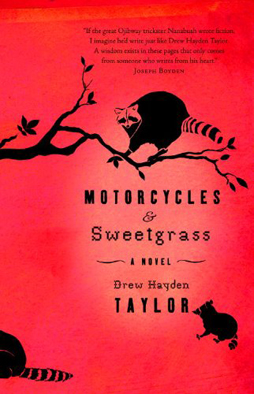 They’re interesting novels to read back-to-back. They’re both about ancient supernatural Anishinabe men who return to Otter Lake and have a profound effect on a young person in that community. But they’re otherwise quite different. The night wanderer is, as we quickly learn, a man who travelled to Europe in the sixteenth century and fell afoul of a vampire. The central character of Motorcycles & Sweetgrass is an incarnation of Nanabush, a trickster from Anishinaabe myth, who turns up in the guise of a white man named ‘John’ (his surname varies depending on who he talks to). The Night Wanderer ends with a powerful scene in which Pierre, the vampire, inspires sixteen-year-old Tiffany to go on living and draw strength from the traditions of their people; Motorcycles & Sweetgrass has a similar scene at the end between ‘John’ and seventh-grader Virgil, but it’s more ambiguous, a reflection on the use of a trickster.

The second book has more of a sense of Otter Lake as a community, a wider lens that shows us more of the people who live there. The Night Wanderer is comparatively concentrated. It isn’t quite a full-bore horror novel, but has strong horrific overtones: it feels right that the vampire story has an almost claustrophobic concentration on the internal life of a small group of people. Motorcycles & Sweetgrass, following a trickster-hero, is not only funnier but more complex structurally, as Nanabush affects the society around him as well as select people within it. It feels as though the structure of the two books reflect the nature of the different visitors to Otter Lake, and the story and the more-than-real mesh nicely. 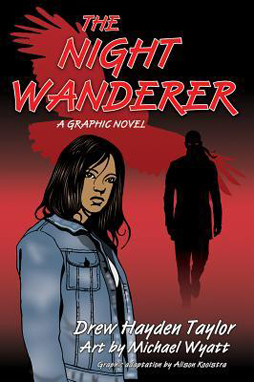 Both stories use their fantastic imagery as a way to talk about colonialism, among other things. Pierre’s made undead by a European myth, while Nanabush has a number of literal and figurative dialogues with Christ (although it has to be said Taylor’s Christ is relatively unconvincing, explicitly having no sense of humour). Beyond the fantasy, both books also deal with colonialism as part of the setting and characters, with Motorcycles in particular taking direct aim at Canada’s genocidal residential schools program. At the same time, both books also have a kind of optimism to them, a sense that a better future rooted in the living past is a real possibility, a sense of the value of youth and the next generation. And again that’s reflected in the stories of the living myths that visit Otter Lake; what’s dead is put away, what lives may move on but remain potentially present. Motorcycles and sweetgrass: the vehicle that takes you away, the grass that grows from the soil of a specific place and can be braided in just such a way as to evoke memories, binding past and present.

Which runs the risk of making the books seem more straight-faced than they are. In fact the humour of both books is extensive and successful, not just funny but well-judged structurally; it’s humour used to reveal character and reveal truths, not to obscure, not to distance. I suspect it also helps Taylor avoid romanticising his subjects, particularly when dealing with spiritual themes. It strikes me that part of the legacy of North American colonialism is the facile romanticisation of First Nations’ religious traditions, and that this poses a challenge to a storyteller trying to work with those traditions in a meaningful way — if white society has created a caricature of ‘Indian spirituality’ and ‘connection to the land’ and the like, how do you talk about these things without falling afoul of the caricature? Obviously having real knowledge of the myths and religions and communities in question is a start. But beyond that, Taylor’s not afraid of a kind of irreverence in writing about these themes; and, paradoxically, that occasional irreverence in the long run helps create a distinctive sense of something sacred. Taylor’s irreverence is not the mocking irreverence of Voltaire, but a kind of respectful grin that makes his stories feel deep and true, so that moments when he modulates his tone to something more serious have greater weight. And the greatest weight when, most impressively, he’s funny and serious at the same time. 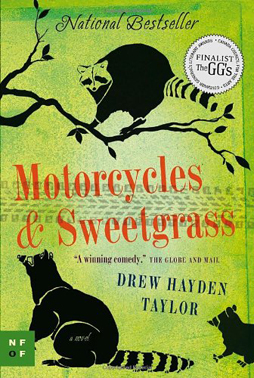 The writing’s relatively straightforward. The first book is clearly more YA than the second, with Tiffany more central to the story than Virgil. Motorcycles feels almost like it has a YA skin stretching over other points-of-view and perspectives. The style’s much the same as The Night Wanderer, but there’s a wider cast, and we see things through more sets of eyes, many of them adults with adult concerns and drives. If The Night Wanderer has a relatively direct structure, with two main points-of-view that revolve around each other until the final scenes bring them together, there’s a kind of farce-like feel to Motorcycles & Sweetgrass: the novel moves easily from plot strand to plot strand, some serious and some not (particularly charming is the recurring anti-Nanabush agenda of the raccoons living near Otter Lake), and eventually they all come together at the climax. Or almost. Taylor isn’t writing quite that sort of story. So what looks like it’ll be the climax instead sets up the real emotional heart of the story. It’s an interesting technique, and quite effective.

It seems to me to be of a piece with the book as a whole. With both books: both novels are fantastic and wise. There’s no mystification in either, no assumed airs. But there is a certain amount of truth, craftily delivered. Which is to say that these are strong stories. Among other things, they establish Otter Lake as a living setting. I’ll be interested in seeing if Taylor returns there in future.