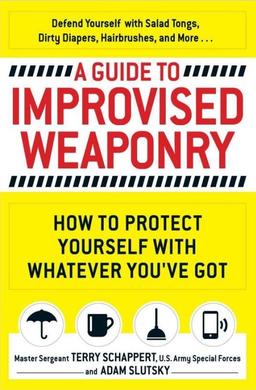 There are a lot of how-to manuals for writers out there–books about world building, books about grammar, books about finding markets, books about almost every aspect of the writing life. Sadly, there’s no book telling writers how to defend themselves if an axe murderer invades their home office.

A Guide to Improvised Weaponry is the perfect self-defense manual for any writer. It tells you just how to defend yourself when ISIS terrorists decided your work in progress makes you a candidate for their next YouTube video. It’s written by Terry Schappert, a Green Beret and Master sergeant in the U.S. Army Special Forces. This guy knows how to kill you with a pencil. It’s co-written by Adam Slutsky, a professional writer who probably had to explain to Terry that a disappointing advance, low royalties, and non-compete clauses are not valid reasons for killing an acquisitions editor with a pencil.

Each chapter focuses on a common object that you probably have in your home. I was especially interested in objects that are in my home office, ready to be picked up the moment one of my many anonymous online haters kicks in my door.

First, my coffee cup, strategically located to the left of my computer, ready to protect me and mine. Schappert makes the obvious suggestions, like flinging my hot Ethiopian brew into my attacker’s face or using it as a knuckle duster, with the caveat that there’s a good chance of hurting your hand with that second method. He also explains how you can use it to catch the tip of your attacker’s knife and deflect the blow.

While some chapters are fairly straightforward, like the coffee cup scenario, Schappert likes picking objects that are seemingly useless in a fight. For example, you can hold one flap of your wallet and slap your opponent with the other, or distract them by tossing some bills in the air and running. Tossing stuff in the air is a common technique. The human mind is wired to look at something flying close to the head, so if you’re in a jam, throwing stuff one way and running the other is a good idea.

Shappert talks about running a lot. Despite his lethal pencil skills, he makes it clear that things like your car, money, and self-respect are not worth risking your body for. Only fight when you have to defend yourself or your loved ones, and then go all out, releasing your wild inner monkey and getting crazy. Once you’re in, be in 110%.

I was reassured to find several other objects in my home office can be used against people wanting to kill me. That extension cord on the floor can be used as a flail, garrotte, or lasso. My laptop makes a good shield or bludgeon. The stapler can shoot staples into my opponent’s eyes, and the staple remover next it can be used in all sorts of ways to gouge and mam., I can even make a knife out of the light bulb hanging from the ceiling.

Schappert doesn’t just list ideas; he gives detailed instructions on just how to turn these everyday items into deadly weapons. Well, not always deadly. He’s quick to point out that many of these weapons will only temporarily distract or annoy your opponent, buying you a precious second or two to pick up something better or make your escape. Shooting a rubber band in someone’s eye isn’t going to end the fight, but it might just give you the edge you need to come out on top. The key to winning a fight is to not act the victim, but to become more aggressive than your opponent. As Schappert says “any weapon is better than no weapon.”

But is a roll of toilet paper shoved into your opponent’s mouth really better than a meaty fist with some training behind it? Is a folded-up cardboard tube from a toilet paper roll really such a good shank that it’s better than a well-placed knee to the groin? I’m thinking that for people who are concerned about self-defense, it would be best to get a regular workout routine and some martial arts training. I’m a lot more productive at my job now that I’m working out six days a week than I was before I started, even though I lose those hours in front of my computer. A healthy body is its own reward, and it can help you in your professional life as well.

Just in case, though, I’ll edge my stapler a little closer to my keyboard. I’ll also set a roll of toilet paper next to my computer. I can always tell my wife it’s for home defense.

I hold black belt rank in Okinawan kenpo, and have training in a few other arts, and I’m not convinced that literally *any* weapon is better than bare hands. My hands are versatile tools. I’d rather use them than fill one of them with a toilet paper roll.

I’m also a firm believer that fighting is something you physically train, not that you read about. . .but this seems mostly intended as food for the particularly bloody imagination.

I don’t know….I spent a stint of training with the German Kamfenjagers who did combat with shovels. I laughed at the beginning but became a believer. I look forward to some ISIS nut that attacks me while I’m gardening.

Ape, one of my favorite cinematic fight scenes of all time is the Shoveler’s most heroic moment in Mystery Men.

I just want to second Sarah’s shout-out for the Shoveler (a criminally underestimated superhero), and the genius that is Mystery Men. Ah, I love that movie!